A few weeks ahead of the new Porsche Cayenne’s world premiere, we joined the engineers for an early drive 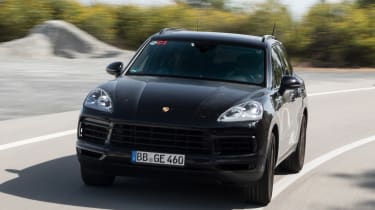 In its third attempt, Porsche is finally getting it right with the Cayenne. Even from this brief taste the SUV has been moved on significantly over previous generations with better tech and a more dynamic drive. With unique engines over Audi and VW, plus a set-up more agile than the BMW X5, it feel like Porsche is focusing on the driver and engagement behind the wheel more than ever.

When Porsche launched the first generation Cayenne in 2002, the company made a bold step away from the core of its brand – an SUV is not a move you’d have expected from one of the finest sports car manufacturers around. But 15 years and more than half a million sales later thanks to China and the US the Porsche brand has changed completely.

The Macan and Cayenne are Porsche’s big players, so it wouldn’t be crazy to think of Porsche as an SUV-manufacturer that builds a few sports cars. But when the third generation Cayenne is launched next month at the Frankfurt Motor Show, Porsche will take a step closer to its core values once again. At least that’s what the engineers are saying as we join them on the final stage of the Cayenne's development programme in Barcelona to get an early taste of the new SUV.

To make it feel more Porsche than ever, there’s a lot of talk between engineers about firmer suspension, more precise steering, more dynamic behaviour in tight corners and more powerful engines. 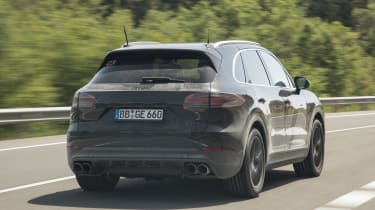 As with the previous generations, Porsche is building the Cayenne on the same architecture as the Audi Q7 and the forthcoming Volkswagen Touareg. “But we did a lot of work so that the customer can’t feel that,” Peter Hass, the group leader for vehicle testing of Cayenne, told Auto Express during test drive.

To give the Cayenne a unique setup engineers not only changed the software of the steering and suspension, but also some of the hardware including the axles and the four-wheel drive system. The wheelbase is also around 100mm shorter than the Q7, but overall the new Cayenne is longer than the car it replaces.

While the structure is Q7, the engines will be familiar from the new Panamera; the only difference being that they are mated with an eight-speed automatic rather than a double clutch-system to ensure an even more comfortable gearshift, better off road-performance and a smoother start while towing.

All engines will deliver more power and provide better efficiency than in the outgoing model. In the initial batch of cars, Porsche will fit the entry-level Cayenne with a 3.0-litre turbocharged V6 developing 335bhp, while a 2.9-litre twin-turbo with 434bhp in the Cayenne S and a mighty 4.0-litre V8 with 540bhp in the Cayenne Turbo sit above it – so no diesels initially. And you don’t need much imagination to image a Cayenne GTS, a Turbo S and a plug-in-hybrid further down the road.

Despite the fact there's no diesels from launch, the oil-burner is still on the engineers list; the biggest markets for the Cayenne are China and the USA and both are pure petrol markets so the diesels will arrive a little later.

Even before we switch places with the engineers and get behind the wheel for a short moment, you can easily recognize the benefit of the new platform, the loss of about 70kg and kerb weight just below two tons for the entry model due to more aluminium and lightweight materials.

The new three-chamber air-suspension now gives more variety for the three different drive modes and while Comfort feels more resolved on high-speed highway-driving, the car feels more agile and responsive in the Sport and Sport+ mode than before - especially when you swing along a curvy country road at higher speed; it feels more balanced and doesn’t lean excessively into corners. It’s no 911 or even a Macan, but it feels more Porsche than before.

The cabin also looks pretty familiar when you lift the camouflage for an instant. You will see the same instruments with the two big screens left and right of the prominent analogue rev-meter in the centre, while the enormous touch sensitive centre from the Panamera also features. It feels clean, modern and a huge improvement over the outgoing Cayenne, with less buttons and switches, more gloss and glamour and an up to date infotainment system. 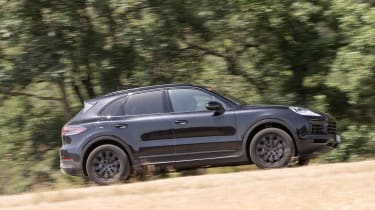 After half a day with the development team and their prototypes the new Cayenne is no secret to us anymore. We have learned how the team has injected a lot of trademark Porsche-genes into the Audi-platform and have seen how the excellent Panamera influences the interior design and on-board technology.

The only detail that is still hidden is the final shape of the third generation SUV. Despite the car being disguised there won’t be many surprises; the proportions and dimensions haven’t changed all that much - the car is only a tiny few millimetres wider, 10mm lower and 50mm longer than before. And most significantly, the Cayenne is way too important for Porsche to risk making huge changes, as one engineer put it: “You don’t start a revolution on one of your most important cars.“