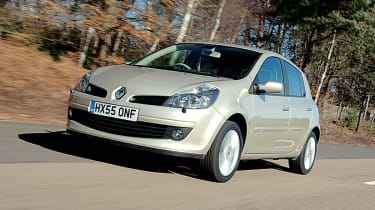 “Brilliant - much more practical than the old Clio, but it's a shame the spare wheel is still mounted underneath the car, exposed to the elements.”

“We are pleased with the car and can't really fault it, but I have been used to a bigger car for many years therefore I am a little disappointed with the comfort and ride.”

“Cliosport 197 is ultimate hot hatch but displays typical Renault electrical faults. Engine is not at its best when cold. Can be quite difficult to drive smoothly.”

“Really like the car. Shame there wasn’t many Renault accessories such as bodykits available when I ordered it though.”

“Nice Little car, but persistent turbo problems have caused me to take it to the garage three times.”

“The only complaint I have about the model (3-door), is that in the magazine (Renault’s own: Production), and on their website it states ‘that there is a additional 12v socket as standard’. This is incorrect. It is only on the 5-door. When I complained to Renault customer services I was told that ‘it was a printing error, and they are not willing to do anything about it and if I wanted to take it further I should contact the dealership where I bought it and see if they are willing to do anything to solve my complaint.’ This all took place from the day after I signed for the car (mid September) for two weeks. The website and magazines are still stating that the additional 12v supply is fitted as standard in the 3-door.”