The Clio’s engines aren’t the strongest, but running costs and emissions are still very competitive 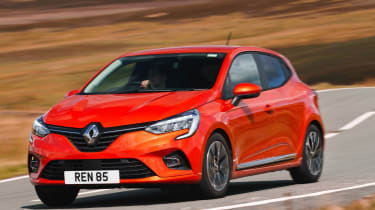 Although the Clio E-TECH hybrid is more expensive to buy than other fossil-fuelled versions in the range, it will no doubt produce the best economy figures and lower emissions. However, Renault is yet to finalise exact data for the petrol/electric model.

The single diesel option, the 1.5-litre Blue dCi 85, is still cheap to run – Renault claims a combined 67.2mpg and emissions of 109g/km. Like all Clio engines, the diesel is fitted with a stop/start system as standard.

The most efficient petrol-powered Clio is the TCe 100 with its turbocharged three-cylinder. It’ll return a claimed 54.3mpg on average with emissions of just 119g/km – for comparison’s sake, the Volkswagen Polo Match with an equivalent 1.0 TSI 95PS engine and five-speed manual will return 47.1 to 50.4mpg on average, with emissions from 127g/km.

The entry point to Clio ownership is the SCe 75, powered by its naturally aspirated three-pot. Despite its lack of forced induction, the engine manages to return respectable figures – 52.3mpg on average and 121g/km. 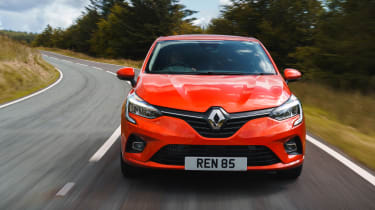 The highest-performing model in the range is the TCe 130, but despite its extra power this engine still offers reasonable running costs: economy is quoted at 49.6mpg and CO2 emissions at 130g/km.

All Clio models should prove to be affordable choices for company car users. The cheapest SCe 75 model in Play trim commands a low 26% BiK percentage charge, while the most expensive TCe 130 in RS Line trim only bumps this up to 29%. Low CO2 emissions across the board mean that first-year road tax (usually rolled into the on-the-road price) is very reasonable, too.

The Renault Clio occupies insurance group 3 in the least powerful SCe 75 guise, but opting for the more powerful dCi 85 and TCe 100 versions brings a step up to groups 9 or 10 depending on spec. The most powerful TCe 130 is in insurance group 16.

Our experts predict that the Renault Clio will retain about 39 to 45 per cent of its value after three years and 36,000 miles at trade-in time. By contrast, the Ford Fiesta is expected to hold on to around 37 to 49 per cent – a wider range that correlates to that car’s broader selection of models.