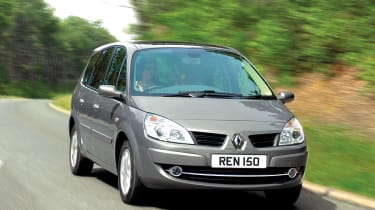 “I am truly sorry I got this car. The electrics and auto gearbox have a mind of their own, and you only have to look at the paintwork and a scratch will appear.”

“A very comfortable ride, a pity an updated model came out three months after I got mine.”

“The Grand scenic is practical but the third row of seats there is not enough legroom even for kids from about 10 years old and the second row of seats are hard to take in and out. Apart from the rear suspension being quite loose it is a nice car to drive.”

“An innovative, if not the most up-to-date, car. Well built with a number of quirky features, although the rear seat-folding mechanism could be better. Good handling for a MPV and excellent roadholding. Extremely satisfied.”

“I think it is brilliant. I wish I could buy a new one of the same model but I regret it has been replaced with the new Scenic which is too wide for ease of use in a single garage and does not have the appeal of the previous model, which is small on the outside big on the inside.”