As we’ve come to expect from Renault, the Scenic is one of the safest people carriers around. There’s a reinforced steel structure underneath the skin, with numerous crumple zones and ‘ultra high elastic’ structure points that can withstand huge amounts of pressure. Alongside that every Scenic has seven airbags as standard, contributing to a 90 per cent Euro NCAP score for adult occupant protection when it was tested in 2016 - a score that also applies to the larger Grand Scenic.

There are plenty of active safety systems playing a part in the Scenic’s five-star Euro NCAP rating. Renault claims it's the only people carrier in the segment to offer Active Emergency Braking with pedestrian detection as standard. There are also systems such as lane departure warning and lane keep assist, adaptive cruise control and fatigue detection.

Reliability is a bit of an unknown, but Renault has made great strides in the area of late. The French car maker has had a variable set of results in past Driver Power surveys, although some of our most recent annual polls have seen Renault placing in the top 10 manufacturers, well ahead of some premium brands.

Of more concern is the performance of Renault's dealers in the Driver Power survey. In earlier years, Renault had fairly poor results, but it turned its fortunes around for the 2016 survey by finishing top of the table. However, since then it has had a major reversal of fortunes, finding itself near the bottom of the pile again in recent years. 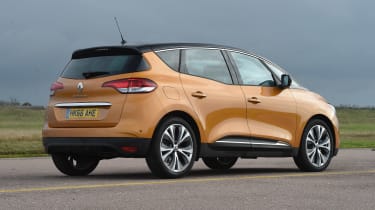 Renault offered a four-year/100,000 mile warranty when the Scenic was first launched, but it has now reverted to a three-year cover. The reasoning behind this is because most buyers now take out finance to buy a new car, and with most repayment plans lasting for three years, it made the fourth year of cover redundant.

The three-year/60,000-mile cover is pretty standard in the market, and isn’t quite as strong as that offered by manufacturers like Hyundai and Kia, although it does come with three years of breakdown cover that features roadside assistance, home start, recovery and onward travel assistance. In addition, the paintwork is covered for the same amount of time, while the corrosion cover lasts for 12 years.

Like other Renault models, the Scenic requires attention every 12 months or 18,000 miles regardless of engine. Like most manufacturers, Renault offers a servicing package that can be added in when you purchase the car.