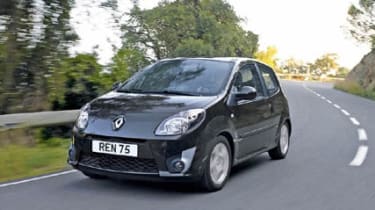 The Twingo is reasonable value in Dynamique trim. But as soon as you venture out of the city limits, the shortcomings of the engine will be exposed. And when you consider that its predecessor was a funky looking, no-frills runabout, Renault’s latest small car is something of a disappointment.

Few manufacturers offer as wide a range of small cars as Renault. As well as the ever-popular Clio, there’s the Modus supermini-MPV (which is soon to be joined by a Grand version) and the Kangoo people carrier.

Even the previous-generation Clio is still available in bargain Campus form. And last autumn, the firm added the sporty Twingo to its line-up.

We have already tried the turbocharged GT model, but despite its impressive engine, it proved something of a disappointment, as we felt it couldn’t decide whether it was a pocket hot hatch or a cheeky city runabout. So does the Twingo make more sense in cheaper Dynamique trim? We hit the road to find out.

On first look, it‘s hard to tell the lower-spec model from the racy flagship. It has the same sporty styling cues, such as the deep front bumper, 15-inch alloy wheels and large headlamps, but the Dynamique loses most of the distinctive silver trim of the GT.

However, Renault offers a Sport Look pack that adds a silver rear spoiler and privacy glass, while a range of optional sticker sets, inclu­ding twin body stripes, allows owners to personalise their vehicles further. Inside, there is a central instrument cluster and climate controls borrowed from the latest-generation Clio, while a separate rev counter in a pod ahead of the driver adds a racy touch.

Standard equipment is decent, with electric windows, four airbags and climate control all included, while air-conditioning is a £525 option.

In the rear there are two individual seats which slide back and forth by 22cm. Legroom is generous with the chairs pushed back, although this obviously comes at the expense of luggage space. But the seatbacks fold to boost the load area’s versatility.

We criticised the GT variant for the poor build quality of its cabin, and this lower-spec model also struggles to impress. Latch-style door handles are a remnant of the original Twingo, but they feel flimsy, and the paint in the recesses is easily scratched.

The dashboard and controls are cheap and brittle, and while the seats’ trim is smart, the fabric has a plasticky feel. They’re narrow, too, lacking support. Unlike the top-spec Initiale model, the Dynamique doesn’t feature height adjustment on the driver’s seat, which further compromises comfort.

And there’s more disappointment when you start the engine. As with the GT, the Dynamique has a 1.2-litre unit, but this time there’s no turbocharger to give the performance an extra boost.

As a consequence, the normally aspirated four-cylinder powerplant has to be revved hard to make the most of the 74bhp. The trouble is, the vague five-speed gearbox hinders progress, and once you’re finally up to speed, the engine is noisy, spoiling cruising refinement.

The Twingo makes more sense in town. Light steering and excellent visibility ensure it’s perfect for picking out gaps in the traffic, while its compact dimensions mean narrow city streets are simple to navigate.

The suspension absorbs all but the worst potholes, but again the gearbox leaves you fumbling for ratios when pulling away from the lights.

Rival: Peugeot 107 The 107 is smaller than the Twingo, which makes it even easier to manoeuvre in tight spots, while a sharp chassis and eager three-cylinder engine mean it’s far more enjoyable to drive. At £8,195, the Urban Move model costs less than the Renault, yet comes with air-con and stability control as standard.