SEAT will lead the Volkswagen Group project by developing entry-level electric vehicles for less than £17,000, the company has announced. 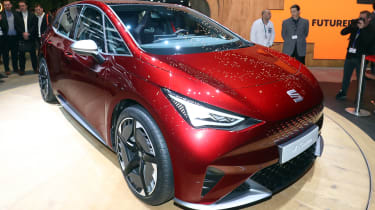 SEAT will lead the Volkswagen Group project to develop an entry-level electric vehicle that can be sold for less than 20,000 euros (£17,000), the company has announced.

The VW Group confirmed two weeks ago the project to develop an ‘MEB entry family’ - in effect, a smaller set of pure-electric models that will be around four metres in length (the same as a VW Polo or SEAT Ibiza) - by 2023. Now SEAT boss Luca de Meo has confirmed that 300 engineers have been assigned to the project in Barcelona, and that SEAT will be one of the brands to use the smaller, cheaper MEB architecture.

"SEAT will develop, in collaboration with the VW brand in Wolfsburg, a new electric vehicle of around four metres, based on a platform that is leveraging the MEB platform technology, here in Martorell. For the first time in the history of our Centro Technico, we’ll help to develop a platform that may be used by other brands around the globe. We are working on the idea that sooner rather than later, everybody will be able to drive an electric car for less than €20,000."

The VW Group CEO Dr Herbert Diess added, "The small electric platform project is a great step towards an even more affordable electric mobility. SEAT will realise the first electric vehicle that is especially designed for urban journeys, available around 2023, for less than 20,000 euros. The total cost of ownership of this vehicle will be lower than that of comparable combustion-engined vehicles, because of savings on fuel and maintenance. It will be the most environmentally friendly and economic way to move in urban areas."

Diess’s comments would suggest that the VW Group is looking at a much more modest range for its MEB entry family than the conventional line-up, which will be launched with the ID. hatchback later this year. It’s conceivable that to keep the price at such a low level, MEB entry hatchbacks could have as little as 120 miles of range between charges.

Luca de Meo also confirmed the identities of the first six pure-electric or plug-in hybrid SEAT cars, which will all be on sale by the start of 2021. The first model will be the Mii Electric, and this will be followed by the el-Born MEB pure EV and then plug-in hybrid versions of the new Tarraco SUV and the next generation of Leon hatchback.

In a significant development, SEAT also confirmed that the next two Cupra models - the Formentor crossover and the Cupra edition of the next-gen Leon - will also feature plug-in electrification. This marks the first major commitment by any manufacturer to make a hot hatchback with plug-in functionality

"We’ll start 2020 bringing to market the Mii Electric. It’s an electric version of the current Mii. We see it as an appetiser, a way for us to test and learn about the electric car value chain. Also in 2020, the new generation of Leon will come to market in five-door and ST versions. It will feature a plug-in hybrid with up to 245bhp and less than 50g/km of CO2 emissions." 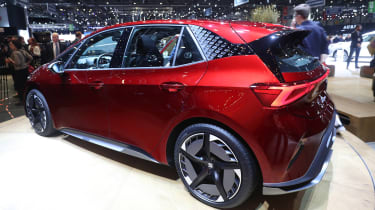 "Just before end of 2020, it will be the moment of el-Born, based on most advanced volume electric platform on the planet, the MEB platform. It will be right in the middle of the European market on size and price. It’s a game-changer."

"In same time frame, Cupra Leon and Cupra Leon ST, both with plug-in hybrid versions, will arrive. And at the beginning of 2021, we’ll close the cycle with Cupra Formentor and Tarraco PHEV. The good news is that we can announce today that the Formentor will be produced here in Martorell."

SEAT confirmed at its press conference that it recorded strong sales in 2018 - the best performance in the company’s history. It made 294 million euros (£251m) in profit last year, a rise of 4.6 per cent over 2017, and delivered 517,600 vehicles, a gain of more than 10 per cent from the previous year.

What do you think of SEAT leading the way in entry-level electric vehicles? Let us know in the comments below...