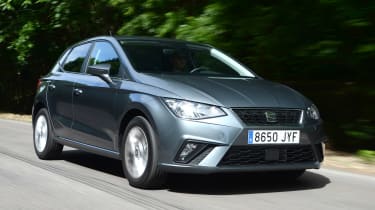 Quiet, comfortable and spacious, the 2017 SEAT Ibiza is our new favourite supermini. It’s not perfect, but just like its predecessor, it’s a dinky, handsome little car that’s attractively priced and cheap to run. It feels more grown-up than before, and comes with loads of modern in-car tech – although you’ll pay extra for the full works. The new Volkswagen Polo and Ford Fiesta are readying their assault, but for now there’s a new top dog in Britain’s favourite segment.

The SEAT Ibiza hasn’t quite made it to the UK – it’s due next month – but we’ve already driven a left-hand-drive model on British roads for the first time.

We were impressed with the all-new Ibiza when we tried it in Spain, and little has changed now we’ve got it to these shores. It’s just as stylish, comfortable and composed, while initial indications suggest it’ll come loaded with kit, too.

The suspension appears well judged, with enough travel to smooth out most bumps without ruining the handling. The driving position seems far better, too, although we’ll have to wait to try a RHD model. 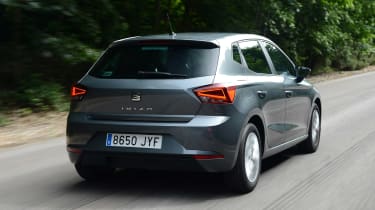 SEAT’s supermini isn’t the most engaging driver’s car in its class, as the steering isn’t very communicative. You don’t feel as connected to the road as you do in the soon-to-be-replaced Ford Fiesta, but it’s the Ibiza’s balance of ability that impresses most. The new car is certainly light and agile enough to offer decent enjoyment.

The five-speed manual gearbox is as good as ever in the Ibiza, with a light but precise change that makes it easy to use. It’s matched here to a cracking 1.0-litre turbo petrol engine, and although it’s the lower-powered 94bhp unit, the turbocharger means it doesn’t feel lacking in outright performance – even on the motorway.

It’s not going to set your hair on fire, but the pleasant thrum and willingness to rev mean it can be fun to drive quickly. 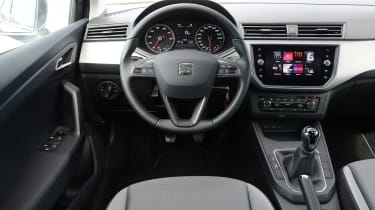 Its best feature is that it’s very quiet, especially at idle. It’s not as smooth as the old 1.2-litre petrol, but the three-cylinder motor is a great choice for the dinky SEAT.

Economy is another strong point for the little triple – SEAT claims it delivers 60.1mpg and 106g/km of CO2. But a more powerful Peugeot 208 1.2 PureTech 110 will trump this, promising 62.8mpg in mixed driving.

The new MQB A0 platform under the skin means the Ibiza is bigger than before (it’s 2mm shorter, but 87mm wider), which is great for interior space. At 355 litres (an increase of 63 litres), the boot is almost as roomy as some cars from the class above. A Mazda 3 is slightly larger (364 litres), while SEAT’s bigger Leon only has 380 litres. There’s almost as much space in the back, too.

The firm has managed to keep the Ibiza’s handsome looks intact, giving it a lower, wider and sportier stance than before.

The angular exterior design highlights match the triangular lights and metalwork creases, which makes it one of the most stylish superminis in the business.

Inside, there’s a lot of soft plastic, but there are still some cost-saving hard finishes around – especially on the doors and the top of the dash. It’s a little disappointing given the improvements made on the latest Leon, but it’s easier to forgive in this class. 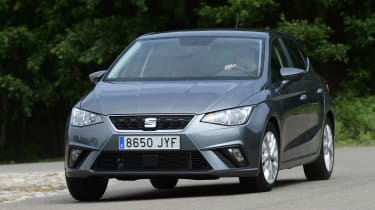 The infotainment system is stunning, however. It’s an eight-inch capacitive touchscreen packed with features, but our SE car doesn’t come with sat-nav as standard – and FullLink smartphone connectivity is a £150 extra.