The Skoda Octavia Scout works best with the small engine and manual ‘box. But is the standard Estate better value? 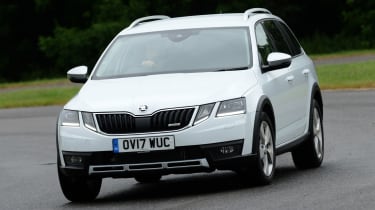 The Skoda Octavia Scout makes the most sense in this specification, fitted with a manual gearbox and the entry-level 148bhp engine. The basic 2.0-litre diesel feels more than powerful enough, and it's significantly cheaper to buy than the flagship 181bhp car. We like the Scout's plush interior and comfortable ride, but a standard Octavia Estate still feels like a better buy, as it's cheaper still and offers a lot of space, refinement and kit for the money.

The Skoda Octavia recently won our Estate Car of the Year award, as it offers a huge amount of space, a composed driving experience and a well-equipped interior. Whichever model you choose it’s a great value new car, and now we've had the chance to try the facelifted Scout version for the first time in the UK.

It's easy enough to spot the Scout model next to the standard Estate, as it features plastic body cladding around the wheel arches, plus silver skid plates on the front and rear bumpers. It rides 30mm higher than the normal car as well, with raised suspension that hints at its improved off-road ability. 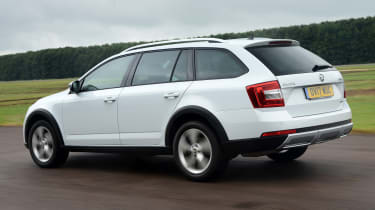 Of course, every version comes with four-wheel drive, also featuring hill descent control to help navigate slippery downward slopes. As a result, the Scout is surprisingly good off-road. It won't trouble a dedicated 4x4 such as a Land Rover Discovery Sport or a pick-ups like the Ford Ranger, but considering most owners won't expect it to tackle anything too extreme, it's more than capable enough.

As it rides higher than a normal Octavia Estate, there's more body roll on the road, but the Octavia Scout is still good to drive. Aside from light, vague steering, it’s responsive enough with loads of grip and a surprising degree of agility. The slick manual gear change is a boon, too.

Having a manual gearbox helps you stay in control when off-roading, and the 148bhp 2.0-litre diesel engine is a great fit in this car. It feels nearly as punchy as the more powerful 181bhp model thanks to its sizeable 340Nm of torque (just 40Nm less than the high-output engine), meaning in-gear performance is very good. You don't need to change down on the motorway to overtake, and there's no need to rev it hard to accelerate swiftly.

A maximum towing capacity of 2,000kg - 200kg more than an equivalent non-Scout model - is useful, as many owners will use their Scout to pull a caravan or trailer. The engine is certainly up to the job, and while it’s a bit noisy, economy of 56.5mpg helps sweeten the deal. This engine with the manual gearbox is several thousand pounds cheaper than the automatic 181bhp car, so it's definitely the Scout to go for - although a normal Estate is cheaper still, and if you don't plan on going off-road much then that car remains a better buy overall. 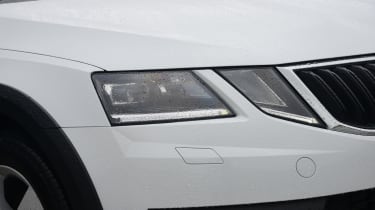 The facelifted Scout gets the same split-headlights and new taillights as every other model in the latest Octavia range, but there's also a great new 9.2-inch touchscreen display on the options list. It's a capacitive screen, and performs like a tablet, so it's much more responsive than the resistive screen in a SEAT Leon X-Perience. It's bigger too, and easy to use despite a disappointing lack of physical switches on the dashboard. The screen features sat-nav and a Wi-Fi hotspot too, which helps the new model feel up-to-date on the tech front.

Plush Alcantara and leather seats are a great addition to the Scout's cabin, and give it a genuinely premium feel inside. Material quality is great, and the seats are very comfortable. Along with the smooth ride, this makes the Scout a great cruiser as well - although it's noisier inside than a standard Octavia since it features big roof rails and a raised ride height, which both create more wind noise at speed. 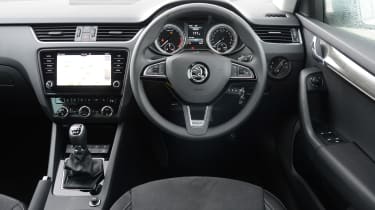 The quality interior is full of practical touches and cubbies that will suit family life, and the 610-litre boot is among the biggest in this class. It's the same as on a standard Octavia Estate, and opens up to 1,740 litres with the rear seats folded down. That's larger than some estate cars in the class above.

Plus, there's loads of room in the back. Even with a tall driver there's enough room for adults to get comfortable as headroom is adequate and legroom ample. The back doors open nice and wide, which should make installing a child seat nice and simple, too.