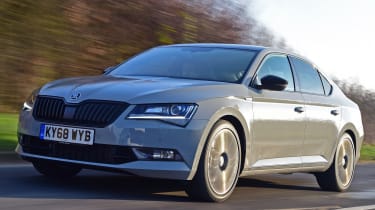 Looking for a fast and subtle saloon, but can’t afford a BMW 7 Series? The range-topping Skoda Superb makes a case as perfect cut-price alternative. The blend of punchy performance and four-wheel drive give hot hatch-troubling performance, wrapped up in a roomy, comfortable family car that slips neatly under the radar. Granted, it’ll appeal to a niche of people – and models lower down the range make more financial sense – but this flagship version makes for a fantastic all-rounder.

It's not often that we get to talk about the latest version of a car losing power, but that's exactly what has happened to the Skoda Superb SportLine. More stringent WLTP testing regulations have forced the fitment of an exhaust particulate filter, so while the environmental benefits are welcome, the changes have chipped 8bhp from the engine’s maximum output, too.

Saying that, the revised 268bhp total isn’t a figure to be sniffed at. Indeed, it’s enough for the Superb to keep its billing as the most powerful car Skoda makes – more brawny even than the sportiest family offerings: the 242bhp Octavia vRS and the recently-introduced 237bhp Kodiaq vRS.

That power, and the hefty 350Nm torque spread, comes from the 2.0-litre ‘EA888’ engine that’s offered in various states of tune throughout the VW Group family – including in its less potent form under the bonnet of the Octavia vRS. The result here, when equipped with a standard seven-speed dual-clutch automatic and four-wheel drive system, fires the Superb from 0-62mph in 5.5 seconds and on to a 155mph top speed. Few cars go so quickly, so subtly. 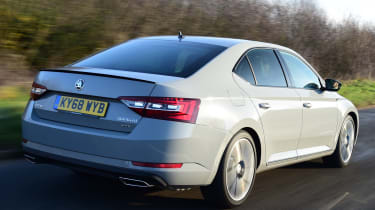 Yet unlike its VW Group cousins that use this engine, the Superb is not a stiffly-sprung hot hatchback. The SportLine trim tested here comes with 19-inch alloy wheels and 15mm ride height drop, which go some way to adding a little sharpness to the Superb’s usually floaty chassis, but the overriding feeling that you get from behind the wheel is of a car that still wants to relax its driver rather than goad them into attacking each corner.

Even if it doesn’t deliver the last word in interaction or feedback, there’s still plenty of potential to make speedy progress. The steering doesn’t have much feel, and its light weighting makes it feel better suited for town driving than anything enormously enthusiastic, but it is accurate. Meanwhile, the SportLine’s electronic differential shuffles power to the wheel that has the most grip, slingshotting the Superb out of tighter bends.

The Superb isn’t really set up for B-road blasts, then, but it’s all the better for it. Despite the big wheels, the suspension does a great job of soaking up the bumps and isolating them from the cabin, particularly if the optional adaptive dampers are set to ‘Comfort’ mode. At a cruise it stays peaceful, with road noise the most obvious sound in the cabin. It’s never intrusive, however.

As always, rear accomodation is vast. Tall passengers have enough space to stretch their legs, while those of average height could get away with bringing along their own tuffet to put their feet up. Not that you’re any worse off in the front, though – the SportLine’s sports seats, trimmed in Alcantara, are comfortable and supportive.

The seats and upholstery are among several SportLine-specific cabin upgrades; there’s a flat-bottomed steering wheel, bits of fake carbon trim and black headlining, too. The eight-inch navigation touchscreen (a larger 9.2-inch screen is optional) features a special performance menu that provides readouts for oil and water temperature, plus a G meter. It’s a fun gimmick rather than a necessity in a car like this, however.

Elsewhere, the same Superb strong points remain: that infotainment system is a joy to use, the uprated Canton sound system is great, and the boot, at 625 litres, is larger than most estate cars. Unless it’s a Superb Estate, which is bigger out back than pretty much anything on the road. 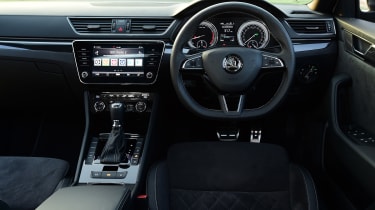 Downsides? Well, the manual override paddles for the automatic gearbox feel small and cheap, and the transmission itself can feel laggy – particularly when moving off from a standstill. It’s also a bit stingy to charge £355 for a reversing camera. Especially because, at £35,115 before options, the Superb SportLine isn’t particularly cheap, either.

However, if you don’t want the SportLine (and want to go all out Q-car spec), this engine is available in the SE L Executive trim for £1,385 less. If you like the look of the SportLine but don’t need 268bhp, you can go for one of three diesel engines, or a 148bhp 1.5-litre TSI petrol – the latter saving the best part of £7,000.