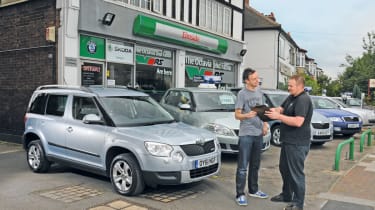 We know readers love their Skodas. That much is clear from our annual Driver Power owner satisfaction survey, which this year was won by the Yeti, with the Superb coming second and Octavia fourth.

But what’s also obvious is that you really rate the company’s dealers. In the survey, we reported how you ranked the network third best in Britain, behind our perennial winner Lexus, and Toyota.

So with our Yeti due for its first service at just under 20,000 miles, it was time to find out why the aftersales care is so highly rated. A quick search on Skoda’s website revealed that there was a garage five minutes’ drive from my south London home. A quick phone call later, OY61 NGF was booked in for a service on the requested day at Elmside Garage, Beckenham.

And that proved typical of the whole efficient, fuss-free experience. I dropped off the car, and six hours later it was ready to pick up, having successfully negotiated its first service. As expected there were no problems, other than slight wear on the nearside rear tyre, which master technician Gary Nelson said I should keep an eye on. We might need to adjust the tracking if things get much worse.

Otherwise, our Yeti is in perfect health, and the service couldn’t have been simpler. It mirrored your Driver Power findings – Elmside’s premises aren’t the last word in luxury (cleanliness and atmosphere was Skoda’s weakest rating in our dealer report), but the staff couldn’t have been more helpful and the £225.62 bill wasn’t too hard to swallow after 19,984 miles.

It’s another 20,000 miles, or two years, before the Skoda’s next owner will have to shell out again. And yes, the all-important service book stamp was there, too.

Back behind the wheel, the Yeti continues to impress. It’s won many friends with its honest, no-frills nature, and I’m a convert, too. There’s adequate performance on motorways from the 104bhp 1.6-litre engine, and enough back road involvement to keep you interested. Only at low speeds does the car falter slightly. It’s easy to manoeuvre and parking is simple, but the ride can be a bit jarring over speed bumps.

What I like most, however, is the way that everything works just as you’d expect it to. The sat-nav is a case in point. I’ll be honest, I’m a bit suspicious of some sat-navs, particularly manufacturer-fitted units. In my experience, many are unreliable and over-complicated, but the Yeti’s is changing my opinion. It has yet to let me down, and is remarkably simple to programme and follow. As a £1,510 optional extra, though, it’s not cheap.

Similarly, changing the seat layout doesn’t require the physics degree and gym work-out necessary in some contemporaries. There are plenty of practical touches, too, such as the cup-holder in the fold-down table on the back of the middle rear seat, which my young daughter can reach from her child seat.

All in all, few cars are as practical and stress-free to own and run. Little wonder Skoda continues to go from strength to strength.

“For such a rugged-looking car, the Skoda returns some remarkable fuel figures. With its Greenline tweaks, ours regularly hits 50mpg on a run.”Lesley Harris, Road tester

“Nearly everything about the Yeti is great. Only the boring grille and ugly B-pillar let it down. Maybe Skoda can fix these flaws when it facelifts the car.”baris_purut, via www.autoexpress.co.uk