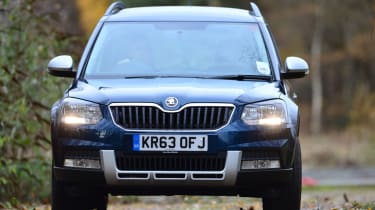 The updated Skoda Yeti still has its place in the crossover class. It’s hard to say for sure if the changes will be enough to take on the new Qashqai, and the driving experience and cabin seem a little bit outdated. But for families after comfortable, spacious and good-value transport, it’s still a great choice. This 4x4 model has strong off-road ability, too.

A new version of the UK’s most recognisable crossover - the Nissan Qashqai – is set to hit the road next year, so the Skoda Yeti has been refreshed to help keep it competitive.

The main difference between this updated Yeti and the old car is that it’s now available in rugged Outdoor trim, as tested here. This means that as well as the Yeti’s new, more traditional front end, you get underbody protection at the front and rear, plus silver door mirrors.

The standard Yeti now comes with body-coloured bumpers and sills for a classier appearance. Those looks may be just for show on the lesser two-wheel-drive models, but our 4x4 car is a capable off-roader.

It has more ground clearance and better traction than most rivals, too. While that won’t matter to most people, it’s still nice to know.

Skoda hasn’t changed the way the car drives drastically. That means you still get a slightly coarse note from the engine, but plenty of punch as long as you keep this diesel in its relatively narrow power band.

The handling is safe rather than exciting and the ride is firm, without being uncomfortable.

It’s a shame that Skoda hasn’t done more to the interior. Next to the new Qashqai’s smart cabin, it looks a little bland and low-rent. At least it’s practical – the clever Varioflex seating lets you slide, recline or remove the rear seats.

The Skoda has price on its side, too, with our SE model costing £21,090. Standard kit includes dual-zone air-con, alloy wheels, cruise control and parking sensors. The cheapest four-wheel-drive Qashqai is better equipped, but costs £25,695.