Here’s where the Yeti trips up a little compared to newer rivals. Although the latest-generation Volkswagen Group engines have been transplanted in, and some of the older units like the 1.6 TDI and 1.8 TSI have been dropped, the fact is that the Yeti’s older design means it can’t compete when it comes to emissions.

The core Nissan Qashqai 1.5 dCi diesel has 99g/km emissions and therefore free road tax for the first year, and that’s something that shows the Yeti in quite a poor light. The greenest version is now the 108bhp 2.0-litre TDI diesel and that can manage, at best, 118g/km, which means paying £30 a year to keep it taxed. It’s hardly an outrageous amount, but it gives other crossovers a clear advantage. 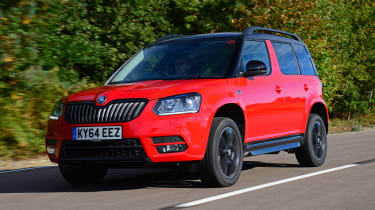 The petrol Yeti, in spite of it being our favourite engine overall, is worse off again. A rating of 128g/km means it will cost £110 a year to tax, a figure that increasingly looks a bit hefty.

Official combined cycle economy figures are 51mpg for the 1.2 TSI petrol and 62mpg for the 108bhp diesel, but in reality most will probably get closer to 40mpg in daily driving. That’s still not too bad though, and a diesel Yeti should go at least 450 miles between fills, maybe a little further if you’re careful and keep the air conditioning switched off.

Incidentally, Yetis now come optionally with a new app called Smartgate that links to phones and tablets and can download driving data for review later. That might help owners tweak their driving style to extract a few more mpg. All Yetis come with stop-start, brake energy recuperation and a gearshift indicator to help keep things as economical as possible. 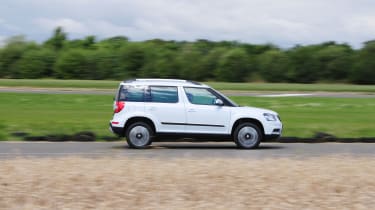 Yetis range from a low of insurance group 13 for the 1.2 petrol to a high of between 18 and 22 for the higher-powered diesels and Monte Carlo models.

In spite of its ageing design, the Yeti remains a car that’s strongly in demand on the used market and that goes pretty much equally for petrol and diesel models, although the higher-spec 4x4 versions might be slightly harder to sell on – Skoda buyers still look at pricing first.

Overall depreciation runs out at approximately 48 per cent retained value after three years, which is at the higher end of the market for a brand such as Skoda.