Yetis are spacious and practical, but growing families will run out of seats

The Yeti’s square, upright styling plays dividends when you get inside – it’s very spacious for what is really quite a compact car on the outside. As standard, with a spare wheel, the boot has 416 litres of luggage capacity and if you fold the back seats that can be expanded to 1,580 litres, which is pretty good.

The Yeti has an extra trick though, as all three rear seats, which can be individual tumbled and folded, also remove individually (be careful – they’re quite heavy). That operation gives an extra 180 litres of load space, bringing the total to 1,760 litres. On some models, a folding front passenger seat is also available, making it easier to load long items.

With a ride-height of 180mm, the Yeti proves itself to be a proper crossover and if you go for the Outdoor version, with its cut-back bumpers, you’ll actually be able to scramble up and down some seriously tough terrain. The height also means that the loading lip of the boot is at a nice level for putting in heavy objects – if you’re of average height, it’ll be more or less at your waist level.

The space inside is tall and mostly square, with no major intrusions or obstructions, although there are some wide gaps between the floor and the backs of the folded seats.

Space in the back seats is a Yeti strong point, as long as you’re only carrying two rear passengers. The back of the centre rear seat can be folded down to make a tray table with integrated cup holders (although it does leave a gap leading into the boot) and if you lift out the middle seat entirely, the two outer seats slide in and back a little to give a touch more leg- and shoulder room. That centre rear seat is just too narrow to be of much use for sitting in though – it’s effectively a jump seat for short journeys.

Growing families will be frustrated with the back seats – there are only Isofix anchors for the two outer rear seats, and the centre rear seat is too narrow to fit a bulky child car seat. Skoda has a larger, seven-seat SUV in the works. For families with more than two kids, it can’t come soon enough. 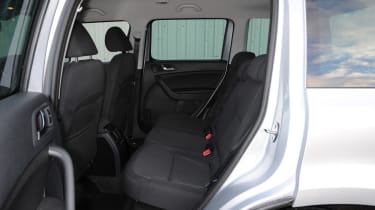 Up front, comfort levels are extremely good – the seats are supportive but not over-firm, and the driving position is high enough to give good visibility but not so high that you feel perched up like a van driver.

Some rivals do offer a bit more space in the back, but the Yeti’s deep glass area actually makes it feel more spacious than it is, which is good news if you’re lugging kids around.

It’s not the biggest boot in the class at 416 litres but the Yeti’s square shape means its boot is versatile. You can even buy add-on extras such as deep luggage nets and baskets, dog guards and even an internal bike rack for handling the detritus of your life. 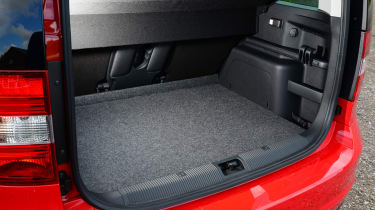 There is, however, no getting away from the fact that the current Nissan Qashqai, the Yeti’s most serious rival, beats it for boot space by 15 litres. Not much, but it can make a difference.

Depending on the engine, the Yeti can handle a maximum internal payload of 645kg while the maximum towing weight, braked, is 2,100kg (for the 2.0-litre diesel). However, there are other options which will offer a slightly reduced maximum towing capacity. For example, those not wanting four-wheel drive can look at the 109bhp 1.2-litre TSI petrol which drives the front wheels only, but has a reduced towing capacity of 1,500kg.