The Skoda Yeti has always had an edge over its crossover rivals when it comes to driving dynamics and as the updates were so minimal the revised car maintained this advantage. Aside from its higher driving position, the Yeti feels just like a regular family hatchback when you’re behind the wheel.

There’s excellent grip, sharp steering and far less body roll than in the Nissan Qashqai, while the Yeti’s lively nature means it’s far more fun in corners than any crossover has any right to be, even if its steering doesn’t feel quite so well resolved as that of the Qashqai.

The pay-off is a slightly firmer ride quality than in rivals, although you really wouldn’t call it uncomfortable. The Skoda is just as happy cruising at motorway speeds as it is tackling the cut and thrust of urban driving. 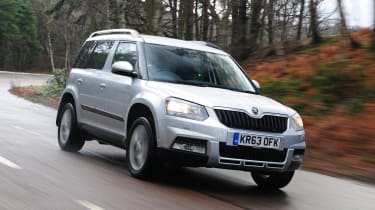 Opting for four-wheel drive gives this family crossover excellent grip in mud, snow or other rough terrain, while the system also softens throttle response to minimise wheel spin and helps the car to descend steep hills in a slow and controlled fashion. An off-road button on the dash automatically controls the traction control, hill descent control and braking and it means the Yeti is incredibly simple to drive off-road - sorting out most problems and lack of grip without you even realising there was an issue.

The only problem is that the tall and boxy design is bad for aerodynamics, so there is quite a lot of wind and road noise at motorway speeds, and the diesel engines are quite loud and rumbly - the 1.2 TSI engine is definitely the one to go for if you're looking for a quiet and refined town car.

The 1.2 TSI turbo petrol engine is a decent performer. It doesn’t feel out of its depth in such a large car, and good mid-range torque means there’s plenty of pulling power when you need it. The engine will be a little underpowered when the Yeti is fully loaded, but most of the time it’s more than capable. 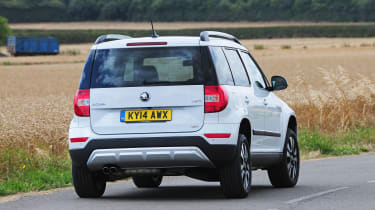 With the demise of the 1.6 diesel and 1.8 turbo petrol options, the only choice for more power in the Yeti is to go for the 2.0-litre diesel in either 108- or 148bhp forms. The more powerful engine comes with 340Nm of torque, 90Nm more than the 108bhp version, which will come in very handy if you’re using the Yeti to haul heavy loads, tow anything or you've bought a 4x4 model with some proper off-roading in mind. If you’re just using it to cruise the motorway network, then the 108bhp version is just fine and you’ll only feel the relative lack of torque if the car is fully laden.

On both engines, the standard six-speed manual transmission is just fine – slick and easy to use - but the DSG dual-clutch automatic option is losing its once-unassailable lead in the sector. Newer transmission designs (ZF’s brilliant eight-speed conventional automatic for instance) are now making the DSG feel a little slow to kick-down and occasionally lost looking for the right gear. It’s a good option for town-dwellers, less so for those looking for a little driver engagement.