New hatch features curvy styling and mild hybrid tech, and goes on sale in the UK this summer

Suzuki has announced UK prices and specs for the new Swift, which will go on sale from early June with two engine choices underpinning a five model strong line-up.

The Swift is now five-door only and the entry-level 89bhp 1.2-litre SZ3 car will be on sale from £10,999, meaning that at launch the very cheapest Swift will be noticeably more expensive than the outgoing £8,999 SZ2 model. As standard, buyers get air conditioning, a leather steering wheel, a DAB digital radio with Bluetooth connectivity, plus styling parts such as daytime running LED lights and 15-inch alloy wheels.

The 1.0-litre turbocharged 3-cylinder Boosterjet engine can be had from £12,999 on the SZ-T model, which adds a smartphone link display, a rear view camera and 16-inch wheels. The same engine with Suzuki’s SHVS mild hybrid system starts at £14,449 as an SZ5 car, introducing automatic air conditioning, sat nav, keyless entry and electric rear windows.

The sole automatic Swift makes use of the 1.0-litre engine too, and is available in SZ5 trim from £15,849, while an all-wheel-drive model with a hybridised 1.2-litre four-cylinder kicks off at £15,499. More choice will be added over the new car's lifespan, and a peppy new Sport version should arrive at some point too.

A new lightweight platform shared with the Baleno means the new Swift weighs from just 890kg, while getting a sportier design and chassis set-up than its more practical sibling.

It’s been set-up in Britain to make sure it can cope with our unique roads, and the hidden rear door handles and floating roofline give it a matching youthful look. The European model seen here uses the more rounded grille and bumper design, with previous pictures revealed by the brand showing a sportier-looking Japanese-market model. 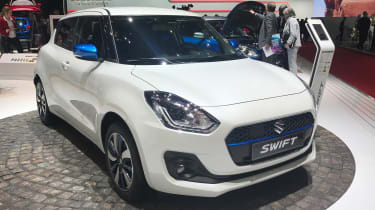 Inside there’s a 4.2-inch LCD display to display driving information, plus a seven-inch touchscreen display for the infotainment system. Suzuki says it can be used while wearing gloves, and features a 3D sat-nav as well as Android Auto and Apple CarPlay.

The petrol-only engine line-up includes a 110bhp BoosterJet 1.0-litre 3cyl turbo, and an 89bhp 1.2-litre four. A mild hybrid system is available with the 1.0-litre engine too, which lowers emissions to 97g/km.A four-wheel drive model will be available with the 1.2-litre petrol, and higher-grade models will get safety kit such as adaptive cruise control, auto emergency braking and a brake-boosting system for emergencies. The range starts with the SZ3, which uses the 1.2 petrol and features air-conditioning, a leather steering wheel, DAB radio, tinted windows, LED daytime running lights and 15-inch wheels. 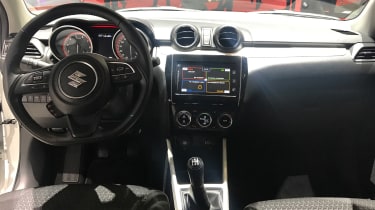 According to UK sales and marketing director Dale Wyatt, the recently launched Baleno takes care of the “rational end” of Suzuki’s small car range. This has allowed the brand to make the next Swift “much more emotional and expressive”, with softer curves and a lower roofline, plus an adaptation of the wraparound glasshouse.

A Swift Sport will follow in 2018 powered by the 138bhp 1.4-litre Boosterjet four-cylinder turbo petrol from the Vitara S. That’s a similar power output to the current Sport, but a torque increase and reduced kerbweight will boost acceleration. There will be much more scope for personalisation and individuality with the new Swift, too, with a variety of exterior and interior customisation choices.

Despite this, as always with Suzuki, value for money will continue to be a priority and prices should stay close to the current car’s £8,999 starting figure. The new Swift will go on sale in June 2017.

Are you a Suzuki Swift fan? What do you think of this new model? Let us know below...

Welcome to our Geneva Motor Show hub page, scroll down for all our Geneva content...
Facelifted Suzuki Swift supermini launched 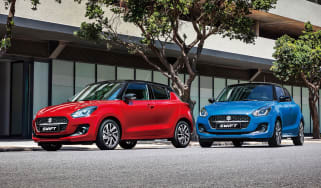 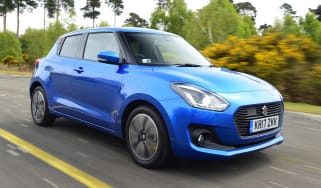 The Suzuki Swift offers a decent drive and reasonable practicality, although rivals are more refined