Corolla's successor to take on Civic, Golf and Astra - our verdict on our first drive 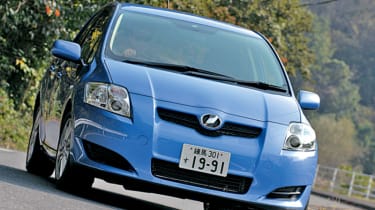 We have been waiting for a true Toyota competitor to rival the big-hitting Volkswagen Golf for quite a while – and, at last, here it is. As with the new Honda Civic, the Auris banishes all memories of its predecessor with a sleek, European-designed body, extra interior space and more style and quality. Better handling is matched with a wide engine range which includes two excellent diesel powerplants.

There’s never been any question that the Toyota Corolla is anything but a huge global success. The world’s best-selling model has set standards for profitability and popularity that are the envy of every other manufacturer on the planet.

Practical, reliable and affordable, it helped to define the family market – so why is Toyota about to change everything for the new Auris? On the face of it, ditching the famous Corolla name is marketing madness. But fortune favours the brave, and the firm claims its new family car is so radically different, only a fresh badge would do.

Designed in Europe, there have been some pretty daring words bandied about prior to the launch of the newcomer. Sporty is perhaps the most obvious. But is the Auris really good enough to take on rivals such as the VW Golf and Vauxhall Astra? And can the newcomer match the impressive Honda Civic, which was not only designed and engineered in Europe, but is built in Britain, too? Auto Express was first behind the wheel of the Toyota to find out.

Early impressions are mixed. The Auris is only 50mm taller and 65mm wider than the current Corolla, and as such looks quite compact when compared to the Ford Focus. However, the fresh styling certainly has character, while a sportier suspension system is also promised, as is a new range of powerplants which will ultimately be crowned with a near-250bhp turbocharged T Sport version.

For the time being, though, our drive is limited to five engines, including 1.4 and 1.6-litre petrol units, plus a 2.0 and two 2.2 diesels. Jump behind the wheel, and the first thing you notice is how roomy the car is inside. It’s not only the extra head and legroom which stand out. The huge expanse of black plastic between the dashboard and windscreen makes the hatch feel bigger than it actually is, an effect created by the low-slanting A-pillar.

In fact, the designers extended the A-pillar so far forward that they have had to include an extra quarterlight window for better visibility. From the outside, the additional glass blends in well with the car’s profile. But from the front seat, it looks rather awkward.

Dominating the cabin is a silver-coloured ‘flying buttress’ centre console, which appears to be floating on the dashboard. It protrudes into the interior, and puts the gearstick, handbrake and switches all within easy reach. Unfortunately, we did notice some glare off the console’s shiny plastic surfaces. On top-spec models, dual-zone air-conditioning, a panoramic roof and paddleshifters will enhance the driving experience. Across the range, the seats are firm and supportive, and even the door handles have been specially coordinated to complement the console design.

The all-new chassis and suspension set-up makes the Auris a promising driver’s car. And just to keep owners on their toes, Toyota has fitted an ‘Eco’ light inside the speedo, which mea-sures your throttle input and glows green to reward efficient driving.

In contrast to the Corolla, the Auris’ chassis is a revelation. As well as better body control, its wider track and re-vamped suspension mean it devours corners effortlessly. Overall, the car feels very grown up, and there’s greater re-finement. On demanding roads, the Auris instantly proves more composed than its predecessor. And on the test track, it is easier to pick a quick line through corners, thanks to the neutral chassis and sharp turn-in. The steering itself is well weighted and responsive, and the rack is quicker than the old Corolla’s.

Crucially, the car’s braking is also much improved. That’s because the Toy-ota gets rear discs in addition to the vented front units, which deliver stron-ger, better balanced stopping power.

Ultimately, the Auris offers a whole lot more than the car which it replaces. It’s a Corolla that has ditched the med-iocrity, toned up its muscles, become much more athletic and taken a course in style and aesthetics. It will land in UK showrooms by next February. Rivals, you have been warned.