Toyota is upgrading its crossover arsenal with the striking new C-HR, and we've been for a ride 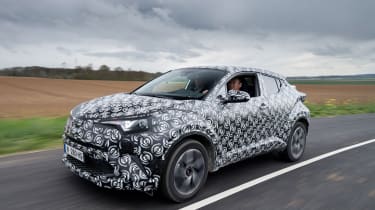 Toyota is beefing up its SUV offerings in Europe, with a more stylish and sporty alternative to the established RAV4 - and Auto Express has been behind the wheel to experience the all-new Toyota C-HR SUV on the road.

The new C-HR SUV is the first "regular" car to be based on Toyota's TNGA chassis technology after the latest generation of the Prius. Despite a flurry of rumours during the build-up to its launch that it would be a rival for the Nissan Juke, it's considerably larger than that. In fact, it's shorter than the current RAV4 but roughly as long as a Nissan Qashqai. So it’s better to think of it as a more style-focused take on a family SUV than yet another entry to the ever-expanding market for baby off-roaders. Head-on competitors are relatively hard to find, but you could consider Audi’s latest Q2 as one alternative.

The C-HR’s regular configuration will be a 1.2-litre, 114bhp turbocharged petrol unit, with front-wheel drive and either a six-speed manual gearbox or a CVT transmission. You’ll be able to buy a four-wheel-drive version with the same engine and a CVT, but there’s no diesel; instead we’ll be offered a hybrid set-up, mixing a 1.8-litre petrol engine with an electric motor for CO2 emissions of less than 90g/km. Even in a class with lots of clean diesels, that will set a new benchmark for fuel efficiency - on the official test, at least. There will also be a 2.0-litre petrol engine, incidentally - but UK customers won’t get the chance to buy it. 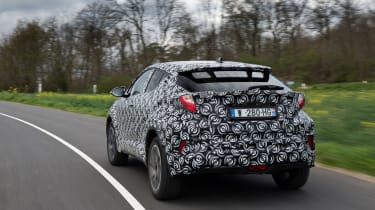 We were allowed to sit in with C-HR chief engineer Hiroyuki Koba as he evaluated late prototypes of the 1.2 front-drive manual and 1.2 four-wheel-drive CVT on roads near Paris. The early signs are that the switch to TNGA could well make the C-HR the most dynamically accomplished mainstream Toyota in recent memory; the chassis appeared to have the measure of French cobbles at low speeds, isolating the bottom of the seat from the worst vibrations, but with an assertive enough set-up to settle quickly after faster bumps and resist underbody scuffs in bad compressions.

It felt decently flat through corners, too - particularly on the 18in wheels of the front-drive manual model. The C-HR will be the first manual-gearbox Toyota in Europe to get the firm’s rev-matching electronics, called I-MT. It appeared to be doing an impressive job of blipping the throttle on downshifts, as enthusiastic driver Koba-san pitched the C-HR into tighter corners. The car looks like it’s set up more for understeer than for oversteer, predictably - but from our observation, it looked surprisingly adjustable on the throttle, as Koba used subtle adjustments to get the nose to tuck in when required. 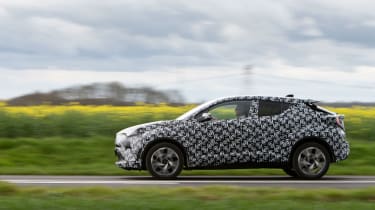 If there is a weak spot, it could be the engine. We know the Toyota 1.2 already, of course, and it’s a reasonably punchy motor for its size that’s smooth when spinning up and refined when cruising. But Koba-san’s keen driving approach only served to illustrate that a bit more power and torque from under the bonnet wouldn’t go amiss for anyone who wants real fun. Normally, of course, there’d be a torque-rich diesel in the line-up to compensate - but the C-HR will get the even more eco-focused hybrid instead. A fizzing 1.6 turbo petrol would be a useful addition to the range, we suspect.

Toyota’s engineers had covered most of the dashboard but from what we could see, it’s safe to say the C-HR has a large central display mounted high up in the middle of the fascia and that even the heating and ventilation controls are usefully positioned. It’s hard to judge materials from such an early prototype but we did catch glimpses of piano-black finish round the air vents; it’ll look either posh or an attempt to make cheap plastic look posh, depending on your point of view. The steering wheel looks like it is coated in more expensive leather, though. 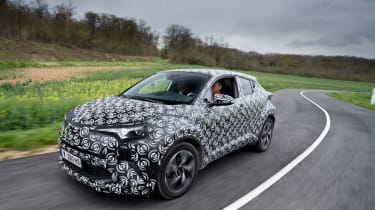 Up front, the cabin feels pretty much as spacious as most family SUVs - and while there’s undeniably less space in the back than in a Qashqai or a Kadjar, it’s still relatively spacious for six-footers - more than you’d expect, in fact, given the rakish rear roofline. It does feel a little gloomy in the back seats, though, thanks to deep metal flanks and very slim side windows. If Toyota ends up offering a panoramic glass roof, customers would be well advised to consider it.

The boot capacity is 370 litres or thereabouts, depending on whether you’re willing to accept a puncture sealant kit instead of a spare wheel. Having the actual tyre as backup lifts the floor, reducing overall capacity but also creating a flatter load bay when you lower the 60/40 split rear seat. There’s an awkward step otherwise, and none of the boot floor tricks that you get in a Qashqai. 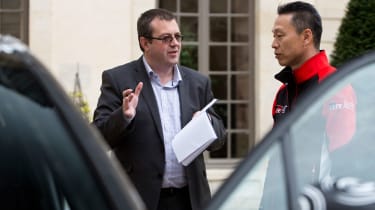 Toyota expects the order books for C-HR to open in September, with first deliveries due early in 2017. On the strength of this brief experience of the car, it could quickly become the strongest offering in the brand’s range, with polarising looks that will appeal to those wanting something different, a surprising amount of practicality, solid dynamics and some efficient engine options. We look forward to revisiting these first impressions in more detail, and on UK roads, in the autumn.