The new Toyota Corolla GR Sport adds a touch of sporting flair to the hatchback's range, but the steep price tag would have us thinking twice about buying it. 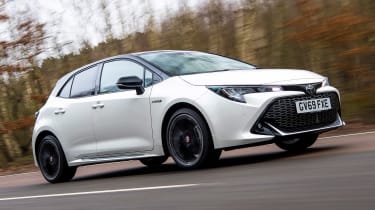 On the surface of things, the GR Sport is an attractive addition to an already rather appealing Corolla hatchback range. It certainly looks the part and, unlike the Yaris GR Sport, manages to show off the Corolla’s key strengths without coming across as compromised. But, you seriously have to value its combination of sporty styling and green eco credentials, as its list price is well into serious hot hatchback territory. On this front, the Corolla GR Sport is poorly armed.

Toyota has been busy going back to the future. In the past year we’ve seen the famous ‘Corolla’ badge reappear in the UK for the first time in over a decade, ‘Camry’ brought back from the dead and the return of a name that tugs at the heart strings of Japanese performance – the ‘Supra’.

While those names bring back fond memories of Toyotas past, the badge found on this new version of the latest Corolla may not be so familiar – GR Sport.

This sporty addition, intended to rival the Ford Focus ST-Line, arrives at the same time as a Ford Focus Active-rivaling Trek model is added to the Corolla Touring Sports estate car range. Toyota has also kicked off 2020 by deleting the entry-level 1.2-litre turbo petrol from the Corolla’s engine line-up, meaning it’s a hybrid-only hatchback, estate and saloon car now. 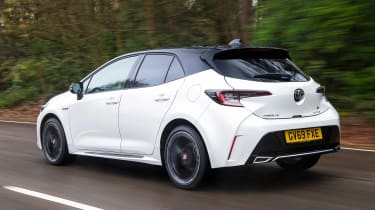 Gazoo Racing (the ‘GR’ in the GR Sport name) is Toyota’s skunkworks motorsport division, and has been pedaling a fine line in tweaking Toyota models to give them more sporting flair.

Until a fully-fledged GR Corolla arrives in around two years time, the GR Sport model is the sportiest version of the Corolla hatchback, and this is our first drive of it.

Much like Ford and Renault do with their ST-Line and R.S. Line models respectively, GR Sport cars see some of that sporting panache sprinkled down to a more obtainable level, and is another trim level in a model’s range. We’ve already tried a GR Sport version of the Yaris Hybrid – launched last year – but were left feeling its tweaked chassis was at odds with its underwhelming and eco-conscious 1.5-litre hybrid powertrain. How does the Corolla GR Sport fare?

Well, on the outside the GR Sport does a good job of spicing up the normal Corolla. The car looks wider and more hunkered down to the road but, in reality, there are no changes compared to a standard Corolla’s dimensions. There’s a different front bumper with a wide mesh patterned grille and black trim pieces, while, at the rear, there’s a slightly different bumper with twin exhaust and diffuser details – none of which the car actually has, and looks rather dubious to say the least. The makeover is topped off with 18-inch alloy wheels, painted black with machined-edge tips to the spokes and red-edged centre caps, and black surrounds for Toyota badges front and rear, as opposed to the blue ones for normal Corollas.

GR Sport Corollas can also be ordered with a dark grey roof, and the new trim level can also be selected on Touring Sports estate models. Meanwhile, on the inside, the only additions are a pair of deeply bolstered sports seats finished in artificial leather, a seven-inch colour display screen in the instrument binnacle and a head-up display. 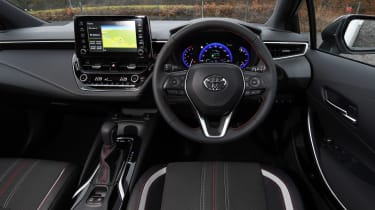 Essentially, what you’re looking at is a Corolla fitted with a raft of old fashioned trim pieces to make it look faster than it really is, because the GR Sport treatment doesn’t extend to any mechanical tweaks. The Corolla doesn’t get any suspension changes, a stiffer anti-roll bar or quicker steering like you find in the Yaris GR Sport. But, considering how underwhelming the Yaris is perhaps that’s a good thing.

As the Corolla is now simply a hybrid-only model, the GR Sport comes with a choice of petrol-electric power. Mirroring the Toyota C-HR crossover’s engine range, there’s a 181bhp 2.0-litre petrol-hybrid on offer, or the same powertrain also shared with the Prius – a 120bhp 1.8. It’s the latter tested here.

It’s certainly efficient with Toyota claiming around 55mpg and in our time with the car we easily achieved 52mpg – even with some enthusiastic driving. It’s clean too as the GR Sport version coughs out a pretty paltry 112g/km. But, efficiency figures aren’t the main reason why you buy the sporty-styled and badged version over a more sober model in the range – it’s more about how it drives. 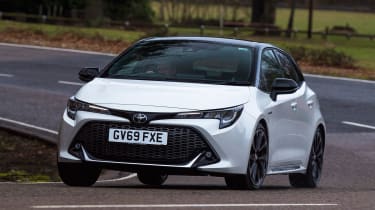 Here the GR Sport scores well. While it doesn’t have any mechanical tweaks like the Yaris, it’s fair to say the Corolla didn’t need them as the standard car is good anyway. Whether you go for the entry-level Corolla or this range-topping GR Sport model, all Corollas handle sweetly. The chassis feels agile and keen to turn into a corner, and the steering is well weighted. The only real difference felt in the GR Sport is the firmer ride thanks to those 18-inch wheels, and it gives the Corolla more poise when cornering.

But it’s hard to drive the Corolla with the type of flair the sporty styling add-ons suggest  because of the hybrid powertrain. While the CVT gearbox is being improved with every new model Toyota launches, it simply doesn’t deliver an engaging driving experience. Whatever you do with your right foot to extract more performance simply doesn’t translate to the front wheels. Zero-to-62mph takes a very sedate 11 seconds; fair enough, but it would be nice if the lacklustre performance was soothing. Gun the throttle and as the clock ticks beyond 10 seconds the engine is blaring away with little improvement to performance.

You’d be better off spending another £1,725 for the 2.0-litre hybrid, as its extra 60bhp and 50Nm of torque translate to not only better performance, but also a less frantic and shouting powertrain. The only problem is at £29,750 the 2.0-litre GR Sport starts to look seriously overpriced, especially when you consider a Hyundai i30 N starts at £26,000 and a Renault Megane R.S. comes in at just over £28,000. While these two cars don’t have the eco credentials of the Toyota, they at least have the performance to match their sporty bodywork and bucket seats.