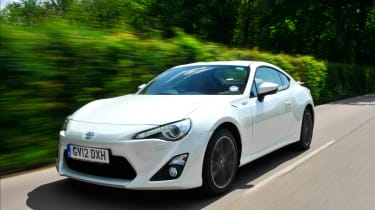 The Toyota GT 86 is a back-to-basics sports car that will have you grinning ear-to-ear on a twisty B-road. And while it can’t quite compete with a modern turbocharged hot hatch in terms of straight-line performance, cabin quality or all-round usability, it more than makes up for that in terms of good old-fashioned, rear-wheel-drive fun. The icing on the cake is that, as it’s a Toyota, the car is also keenly priced, generously equipped and should be reliable, too.

A good indication of how much fun a car is to drive is the length of time you talk about it after your first time behind the wheel. And in our experience, the Toyota GT 86 will have you boring your colleagues for hours.

You’ll drone on about how the steering is sharp and precise, the brakes powerful yet progressive and the chassis adjustable and nimble. Then you’ll go into great detail about the tuneful 2.0-litre boxer engine and joyous short-throw six-speed manual box.

By the time you get round to regaling the moment you felt  like a hero by catching a surprise slide after foolishly turning off  all the safety aids, your  yawning workmates will  have already turned back  to their computer screens.

But they’ll have missed the most important point of all: it’s  a Toyota that’s transformed you into this driving enthusiast bore. Make no mistake: the GT 86 is  a game changer for the brand  – a car you buy with your heart rather than your head. And it’s  a breath of fresh air in today’s world of sanitised motoring.

Increasingly, manufacturers are producing cars that are  astonishingly fast and incredibly capable. Yet somehow many of them leave you a little bit cold. That’s because they lack that  key ingredient you expect from  a sports car: fun. The GT 86,  however, delivers this in spades. Toyota has gone back to basics by using a traditional sports car set-up with a relatively lightweight chassis and a rev-hungry engine up front driving the rear wheels.

Importantly, unlike with most other modern sports cars, these wheels are fitted with thin rather than fat tyres. This means you don’t have to be going very fast  to reach their grip threshold, which makes the Toyota playful.

Thankfully, the car is totally predictable on the limit. Not  only are the responses directly proportional to your inputs, they are faithfully communicated back to you via the steering wheel, brake pedal and driver’s seat. This, plus the standard limited-slip differential, makes it a great car for practising tail slides.

It’s better than its Subaru  BRZ sister model in this respect, because the rear suspension is slightly harder, which gives the Toyota a livelier rear end.

But while the GT 86 is great  for budding drifters, it won’t be for everyone. Its engine needs to be revved hard to extract any kind of performance, and even then it can’t match the straight-line pace of a modern turbo hot hatch like a Ford Focus ST.

The Toyota also makes some  sacrifices in terms of practicality: the back seats are useless, and while the boot is fine for a sports car, it’s dwarfed by hatch-based coupés like Vauxhall’s Astra GTC.

Then there’s the interior. Next to an Audi TT, it feels cheap and old-fashioned. But don’t think of the GT 86 as a rival to the trendy  TT. Instead, view it as a sharper and more focused Mazda MX-5  or an unbreakable alternative  to a Lotus Elise. Like these two, it’s a proper enthusiast’s car that will have you waxing lyrical about how much fun it is to drive.
Share this on TwitterShare this on FacebookEmail