The Toyota Hilux Mk7 comes in three body styles, and has a strong reputation for reliability 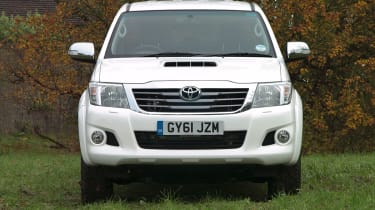 The Toyota Hilux is a big seller around the world, and is known as the Vigo in Asian markets. It’s simply Hilux in the UK, though, and while the popular Surf model never made it here officially – it was briefly sold as the 4Runner, but was axed from Britain in 2009 – the 2013 Mk7 range is one of the most comprehensive on the large pick-up market.

There’s a choice of single cab, extra cab (an extended single cab with two folding 'jump' seats in the rear) and double cab bodystyles, plus HL2, HL3 and Invincible specifications. Single and extra cab versions only come in entry-level HL2 trim, which is aimed at working users, while drivers choosing the double cab have the option of all three specs.

Automatic part-time four-wheel drive is fitted to all versions of the Hilux, while standard equipment includes remote central locking, electric windows, electric and heated door mirrors, and air-conditioning whichever spec you go for. Invincible models are marked out by their touchscreen sat-nav.

As with most pick-up models, the Hilux isn’t particularly efficient. The large dimensions and open body make for poor aerodynamics, while the four-wheel-drive transmission is heavy. But the big Toyota is no worse in this respect than many of its rivals, with the 2.5-litre diesel promising 38.7mpg fuel consumption and CO2 emissions of 194g/km. On paper, only the Isuzu D-Max performs much better than this. In the real world, most Hilux drivers should achieve 30mpg-plus in normal road driving, but mpg will plummet when towing or heading off-road and using the low-range box extensively.

The more powerful 3.0-litre diesel claims 36.7mpg economy and 203g/km emissions with the manual gearbox, or 32.8mpg and 227g/km with the automatic. Whichever Hilux you choose, fitting one of the wide range of Truckman hard tops should improve aerodynamics, and in turn fuel consumption. Insurance premiums should be competitive with rivals, as the Hilux ranges from insurance group 9A to 10A. That’s on par with the Ford Ranger, Isuzu D-Max and Nissan Navara, although the Volkswagen Amarok sits in insurance group 7E to 8E.

The wide range of bodystyles in the Hilux line-up means a variety of load box sizes. Single cab models offer the longest in this class, at 2,340mm. In the Hilux extra cab, the bigger interior and folding rear seats cut the load bay to 1,830mm long, which is in the middle of the pack in this market.

Double cab models combine the most practical interior with a 1,545mm load box, and again have an advantage over most rivals, with the exception of the VW Amarok and Ford Ranger. The Ford offers a similar choice of cab sizes to the Toyota, as do the Isuzu D-Max, Land Rover Defender and Mitsubishi L200, while Nissan sells the Navara with an extended single 'King' cab. Buyers choosing the VW Amarok only have the option of a double cab. But while the Hilux scores on load box length, it’s left trailing in terms of width – the narrow 1,515mm-1,520mm area is only ahead of the likes of the L200 and Defender.

If you regularly tow a trailer, the Toyota is sure to appeal: it can’t match the 3,500kg braked towing capacity of the Defender, but the Hilux can pull loads weighing up to 2,800kg. Just remember that if the gross weight of your combined pick-up and trailer exceeds 3,500kg, and you are towing for business, you may need to fit a tachograph and abide to regulations on driving hours rules, like an HGV driver.

Check with your dealer or supplier. VAT-registered users can choose a Hilux extra cab or double cab safe in the knowledge that they can claim back their VAT, as payloads range from 1,045kg to 1,060kg. The 1,000kg minimum payload required by Her Majesty’s Revenue and Customs doesn’t apply to single cabs.

The Hilux has a tough reputation, having been used by adventurers to travel to the North and South Poles (Top Gear famously drove to the magentic North Pole in a Hilux that had been modified by Iceland's conversion company Arctic Trucks), and owners haven’t reported any major reliability problems.

As with all pick-ups, though, drivers considering one second-hand should have any potential buy professionally inspected – many models will have led a tough life, with frequent off-road use, and any damage may not be visible externally.

All versions of the big Toyota have a driver and passenger airbag as standard, with side and curtain airbags available on Invincible models, along with vehicle stability control (VSC). Euro NCAP didn't test the Hilux Mk7 in its independent crash tests, but it would probably mark the pick-up down on its rear seatbelts. There are only two three-point belts, with the centre rear passenger having to make do with a lapbelt – this shows the Hilux is still based on an old design, even though it was revised in 2012.

Performance is adequate across the Hilux range, but pulling power is a key selling point of any pick-up. So as the 2.5 and 3.0-litre engines deliver identical 343Nm torque outputs when fitted with a manual gearbox, there isn’t much to be gained by choosing the more powerful version. Go for the 3.0-litre with the automatic transmission, though, and you get 360Nm.

The combination of live axle, leaf springs and long travel suspension can make the back end of the Hilux as lively as in any other pick-up, especially in wet conditions with an empty load bed. Disappointingly, Toyota only offers its Vehicle Stability Control (VSC) system on Invincible models – the set-up isn’t even an option on other versions of the Hilux. Stability control is standard on the VW Amarok and Ford Ranger, as are trailer stabilisation systems. When parking or driving around town, the Hilux needs plenty of room to manoeuvre – it has a turning circle of over six metres. Still, it’s one of the better pick-ups to drive.

As in any pick-up, Hilux owners have to adopt a more straight-legged driving position than in a car, due to the high ground clearance and seats positioned close to the floor. But the cabin feels built to last, as you’d expect from a Toyota.

A facelift in 2012 introduced a touchscreen in the centre of the dashboard on HL3 and Invincible models, plus these versions benefit from Bluetooth hands-free. That’s on top of the air-conditioning and iPod connectivity on the HL2. In the double cab Hilux, there’s extra storage under the rear seats, although any tools and equipment left in the back of the extra cab are on display to prying eyes. To secure items stowed in the load bed, Toyota offers a wide range of tonneau covers, while the variety of hard tops available also provides extra security for the cargo space.