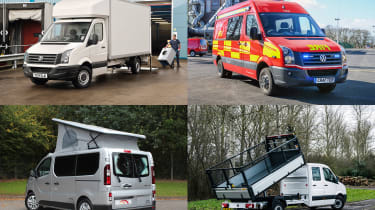 There are a plethora of vans on the market, but sometimes buyers need a tailor-made solution for their business needs. That's where the van conversion market comes into play. Conversions take basic vans and fit them out with bespoke kits to make them suitable for all sorts of jobs. These conversions can come in many shapes and forms, from flatbed pickups and tippers to camper vans and refrigerated vans.

While DIY conversions are available, if you're buying a new van with plans to convert it for your business, then a professional installation is a far better solution. These conversions are available from a variety of sources, although your van dealer will have recommended conversion companies that they deal with. The benefit of the latter is that these conversions will be approved by the manufacturer, and the van's existing warranty should remain intact. Whatever ideas a van buyer has for a conversion, there's likely to be a solution on sale that will suit almost every bespoke need. 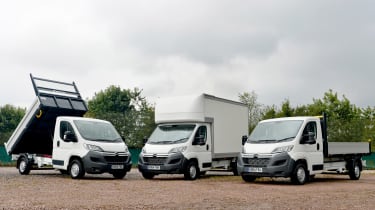 Looking at the conversion market, there are essentially two types available: van conversions for business and van conversions for the leisure industry. Business conversions cover a broad spectrum of bespoke requirements, and different manufacturers have different solutions available. Some makers offer chassis cab variants of their vans which are designed to have a bespoke rear section added, while other conversions fit extra equipment (such as refrigeration) within the existing van body to boost versatility.

Conversions for the leisure industry focus around campervans, which will add a fold-out bed or beds and a small cooking and cleaning unit to an existing van, although some companies can go to great lengths to make a campervan that has as many home comforts as a caravan. Some conversions can also be tailored to carry outdoor equipment, such as bikes, windsurf gear or canoes, safely and securely.

Whatever you need, there is sure to be a tailor-made solution available for everybody. Below is a rundown of the most common van conversions on offer. 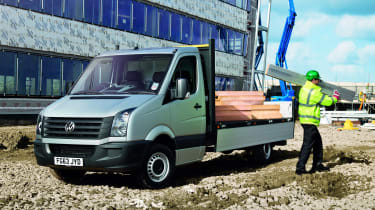 One common conversion for vans is the dropside. This is a type of pick-up, and it features an aluminium bed behind the main body with sides that unlatch and can be dropped so the bed can be loaded with equipment or materials. It's usually offered as a variant of single or double chassis cab vans, and most models are based on large vans, such as the Ford Transit, Citroen Relay, Fiat Ducato, Iveco Daily and Mercedes Sprinter. One exception is Volkswagen, which offers a dropside variant of the large Crafter and the mid-sized T6 Transporter, while Renault offers the same with its Trafic and Master chassis cabs.

Most dropsides feature latches that unlock the sides of the bed and they are hinged so that they simply drop down and hang while you load up. In addition, there are safety catches that prevent the sides from becoming unlatched on the move, while many dropside conversions feature a removable rear panel, which usually won't be permanently attached to the bed and can be taken off completely. 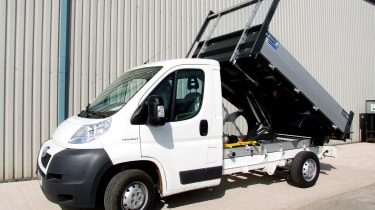 The tipper conversion is a variation on the dropside, as it usually includes the same features as a dropside body, but with the added benefit of a hydraulic ram that can raise and lower the load bed to unload it faster. Like the Tipper, this is a conversion most commonly seen on large vans like the Transit, although rather uniquely Toyota offers this conversion on chassis cab versions of the Hilux pick-up.

A tipper will feature safety locks, both mechanical and electronic, that mean the van cannot be driven with the load bed in the raised position, while an audible warning will also be sounded if the tipper is in motion. These systems run off the van's power supply, so that's either via the battery or with the engine running.

Some makers also offer 3-way tippers. These are hinged from side-to-side as well as to the rear, making it easier to unload their cargo from the roadside without having to park awkwardly to drop your load. 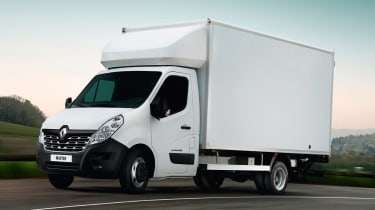 The box van is a smaller evolution of the box truck, and features a large, square container bolted to the back of a single cab chassis van. The benefit of this is that the box (usually based on pre-fabricated aluminium frame) is uniformly square, with no wheelarch intrusion, so there's a maximum amount of space available. Access is usually via a roller shutter door, while a hydraulic tail lift can be added to help access to the load area.

Like a tipper, the box van is commonly added to large vans, as it's a good interim solution between a van and a 7.5 tonne truck, although the large volume of items they can carry means you need to be careful that the van's Mass In Transit doesn't exceed the 3.5-tonne maximum that users with a standard driving licence are allowed to operate.

A popular variation on the box van is the curtain side, which replaces the sides of the box with vinyl curtains that slide open to access the load area. 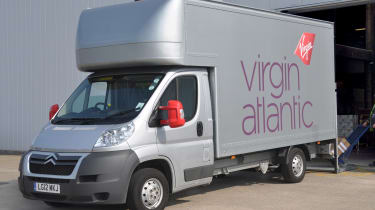 A Luton van is one that features a high box body that extends over the cab. The name Luton comes from the town in Bedfordshire, but there's no connection with the fact that Vauxhall builds its vans there. In fact, Vauxhall doesn't sell a Movano Luton, you have to go with Ford, Citroen or Renault if you want a manufacturer-built Luton van, although aftermarket firms will do their own conversions.

Like the box van, these models are based on single cab versions of large vans with extra space added over the cab area. Just like a box van, the raised height of the Luton bodywork over the cab means you need to be more aware of height restrictions than in a conventional large van. 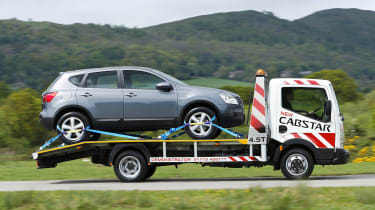 The flatbed van is a niche conversion that comes in two styles. The first is exactly as described - a large, flat panel made with an aluminium frame and hardwood floor that's designed to take a large, heavy item that doesn't move or need to be protected from the elements.

The other type is designed to cater for breakdown services or plant hire companies. These are a special order product, and add a flat area behind a single cab with a ramp section designed to make it easy to drive other vehicles on to it for long-distance transportation. 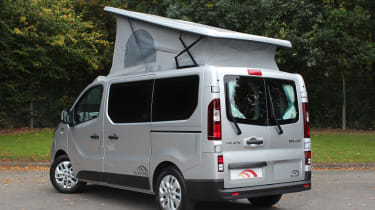 Camper van conversions are based on standard vans and add some home comforts for those who want to travel but like their own space. This usually constitutes a fold-out bed, while some vans add a roof that can be raised (called a dormer), some sort of compact cooking facility and possibly a wash area, too.

Some larger conversions use a chassis cab as their base, but will have no bulkhead so that the front seats can double as arm chairs when the van is pitched up at a campsite. The largest camper vans will have more than one bed (or berths), which can be converted into a living area during the day, while showers and chemical toilets can also be included. Of course, these conversions will include the water and waste tanks necessary to make them work, while some will feature external power sockets allowing you to use on-site power, rather than the van's on-board electricity supply. Motorhomes are a step up from this and are even more comprehensive conversions of standard panel vans with new bodywork. 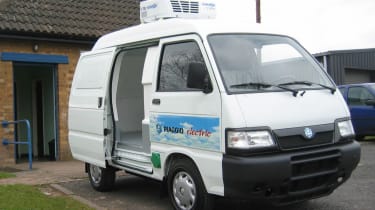 Another standard van conversion is designed for distribution of chilled and frozen items. The refrigerated van will be specially fitted out so that the rear of the van is air-tight to keep the cold in, and there will usually be a separate generator that's designed to keep the rear area cold without affecting the van's power supply. 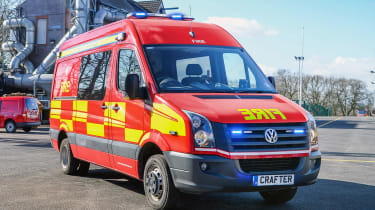 Sometimes, even these conversions aren't specialist enough. There are companies out there that specialise in fitting fire fighting equipment and kit for the emergency services, while others can add hydraulic platforms and cherry pickers with the accompanying stabilising outriggers and other securing systems.

A professional conversion will need to be type approved before it's allowed on the road. In the case of manufacturer-sourced conversions, these will be type approved in bulk so that they can be sold straight to buyers. However, if you are carrying out a niche conversion, then you will need to go through Individual Type Approval. This requires your vehicle to be inspected and approved on an individual basis by the UK Vehicle Certification Agency.

If you're thinking of buying a new van, check out our handy guide right here....