Made In England: how the new Vauxhall Astra is built at Ellesmere Port 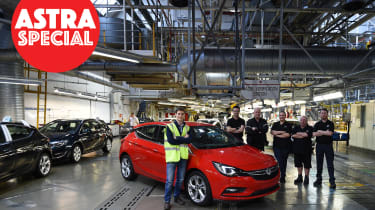 Life at Ellesmere Port starts at 7.30am when around 2,000 workers settle in for another day of building the new Astra. It takes over a million square metres of Cheshire land, 24 hours and dozens of robots to put together the new car, and we’ve joined the morning shift at the Vauxhall plant to follow a very special Astra throughout its journey.

In 2012, the plant won a heavily contested contract worth around £140million to build the seventh-generation hatchback alongside the Sports Tourer estate. The money seems well spent, though, because at full throttle the factory will churn out 680 cars a day – not bad for a plant that’s been open since 1964.

We’re following a very specific Astra, which will be given away to one lucky reader for a year. Yet our first sight of the car is a bare body shell – the only thing similar to the picture in the brochure is the paint.

Before general assembly gets its hands on the car, it is pressed, welded and painted. “Then it goes through trim assembly, where the electrics, some of the softer trims and windows are placed in,” explains Keith Powell, who’s in charge of environmental control of substances hazardous to health and through-put.

We meet Darren Tunstall, team leader at one of the trim assembly stations. “It takes about 75 seconds for us to place the windows,” he says. “The new Astra is a lot easier to build, as space has been optimised so there are fewer screws to bolt.” Each window is prepared by a worker, then picked up by a robot that spreads hot glue around it and presses the window to the car’s frame with the help of laser guidance.

Our Astra gets lifted away by a huge crane to the marriage section of the line, where the car’s underbody – brakes, struts, exhaust and engine – are ‘married’ to the shell of the car. We catch up with Stephen Morris, a production operator in charge of loading the German-made engine into the bottom part of the frame.

“I’ve been here for 11 months, and it now takes me just 30 seconds to lift and place the engine,” he adds as we watch him work – time is of the essence, and signs display target rates and whether or not they’re met. For now, everything seems to be on schedule.

What follows is the most impressive sight of the day. The crane lowers our Astra on to the platform containing the underbody. Hydraulic robots whirr, the body clunks into place and a multi-fastener arrives to tighten the bolts. The whole job takes just 40 minutes.

With the Astra back on the crane, we move to post-marriage. “This is where the car gets its bumpers, steering wheel and fluids,” says Keith, as we watch the crane lower the Astra.

Whereas the previous stations were a combination of robots and manual work, post-marriage comprises manual workers only. One of them is Stuart Haselgrove, who’s in charge of a team placing the front bumpers and wheel fenders on. “It’s simple – just grab a handful of rivets and bolts and get drilling. The whole job takes a few seconds,” Stuart says as he works. 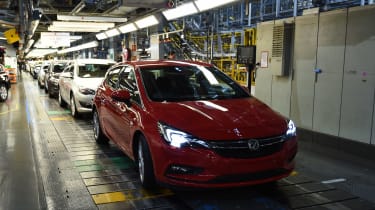 Yet behind the simplicity there is carefully choreographed supply and demand. Parts are delivered just before assembly by an army of drivers who know exactly when to nip into the warehouse for the next batch of bumpers, batteries and steering wheels.

The crane lifts the Astra again and we follow the carefully plotted path to the section where our Astra gets its tyres and seats. Team leader Ian Cooper tells us: “The new seats have a lot more electronics and sensors, so putting them in takes slightly longer.” Not that long, though, as it takes less than 15 minutes to turn the interior into something recognisable.

We then join the Astra on the final stretch of its journey to the slat line, where the rear bumper is put on, pedals tested and final checks conducted. Quality assurance inspector Jill Brockley works around the bonnet, saying: “I check to make sure there are no anomalies in the gaps – if they’re too wide they have a huge effect on the aerodynamics and wind noise.”

Our Astra has to have its right headlamp adjusted to pass – but that’s all. We then watch the car make a final loop around the factory and see it come to the end of the production line. We jump in, turn the key and drive off in our prize car – not a bad day’s work.