Mega Drive: One month's miles in a day in new Vauxhall Astra 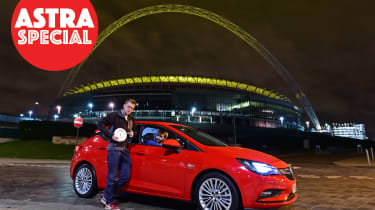 We cram lots of stuff into our busy lives every month. We watch around 141 hours of television, gorge our way through 50kg of food and still manage to squeeze in 73 cups of tea. None of this has much relevance to the new Vauxhall Astra, but what does are the 764 miles the average British driver puts on the clock each month.

Auto Express had a simple, if ambitious plan: we wanted to take the new Astra on a tour of the UK, stopping at each of the Vauxhall-sponsored Home Nations football stadiums – fuelled by nothing but doughnuts and coffee. But here comes the catch. We wouldn’t be covering that distance in a month or even a week; we’d be doing it in a day. 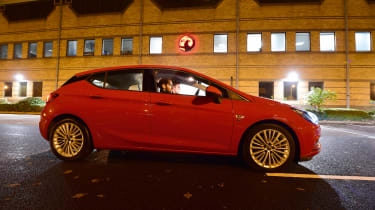 If all went to plan, we’d begin at Vauxhall HQ in Luton and end at Belfast’s Windsor Park, 798 miles and 24 hours later. Crunching the numbers, we worked out we could not only do the journey in a day, but also on just one tank of fuel. The official figures suggested our 134bhp 1.6-litre diesel Astra was capable of 72.4mpg and 764 miles on a single tank. And as 42 miles of our marathon was on the ferry from Scotland to Northern Ireland, the trip computer suggested we would make it. Could the Astra go the distance? More to the point, how would we fare? It was time to find out...

Our journey kicked off in the sleepy streets of Luton, Bedfordshire, at 3am, when senior road tester Sean Carson and I collected the keys to our car. Given the time of day, the first leg of the journey down the M1 to Wembley was simple. Thirty miles in, and with our shots of the Astra with the stadium’s arch in the bag, we were ahead of schedule and halfway to filling a Costa coffee loyalty card. Success.

We then entered the address of the Welsh national stadium, home to Cardiff City football club, into the car’s sat-nav, and our plan was to arrive before most people were even at their desks. The 152-mile leg began with a crawl through West London, which hit our average economy. But the comfort zone of the M4 quickly saw the Astra pick up points faster than England in the Euro 2016 group stages. We were making decent progress and averaging 65mpg. Good, but not enough to get us to Belfast on one tank. 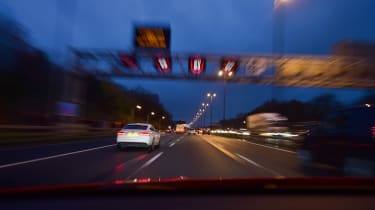 Then we hit an incident around Swindon in Wiltshire. It led to severe tailbacks and added 40 minutes to our journey that we simply couldn’t afford. Our average fuel economy plummeted as quickly as our doughnut count.

The silver lining was that the delay gave us the chance to try out the Astra’s in-car Wi-Fi and new OnStar concierge service. It can help you find anything from Swansea’s finest steakhouse to Croydon’s best car wash, while the navigation instructions are downloaded wirelessly on to the car’s sat-nav. It’s a genuinely brilliant feature and something usually reserved for high-end executive saloons; not a humble family hatchback.

But not even OnStar could save us from Cardiff during rush hour – and the jams meant the trip computer was now saying we would run out of fuel halfway through our journey, just outside Liverpool. The outcome was looking bleak. 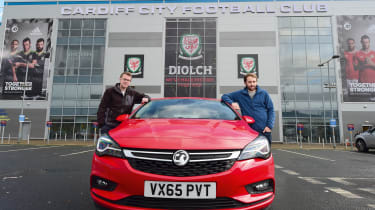 Still, with our stadium shots snapped at Cardiff, we made our way back across the border and up to the home of the Astra: Vauxhall’s Ellsemere Port plant in Cheshire. This wasn’t much of a diversion on the way to Glasgow’s Hampden Park, and we met up with plant director Stefan Fesser. The Ellesmere Port pitstop also gave us a chance to refill the doughnut stash and collect another caffeine fix.

Back on the motorway, and the trip computer was pretty much on the money, as we stopped for fuel 404 miles in – we’d averaged 57.4mpg so far. And while the 235-mile stint from Hapsford Services on the M56 in Cheshire to Glasgow was the longest of the day, the Astra took it in its stride. 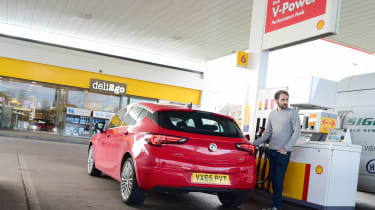 The driving position is almost perfect, with comfortable and supportive seats, plus the gutsy engine lets you pass slower motorway traffic with ease. The car is also laden with tech, so if you ever have to do a month’s mileage in a day there’s plenty to keep you occupied.

Apple CarPlay provides access to all of your smartphone’s key functions, while the on-board Wi-Fi is fast enough to download an Attenborough documentary on the move. Plus, the rear is spacious enough to set up a three-man defensive wall.

A little over 14 hours in and Hampden Park welcomed us with sub-zero temperatures and an icy darkness. But by the time we’d taken our pictures, the chances of us reaching the south coast of Scotland for our ferry to Belfast were slim. 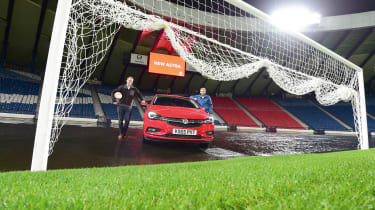 The chase down to Cairnryan in Dumfries and Galloway to catch the ferry was on. But the Astra doesn’t just have mile-munching ability in its locker, as the new chassis, solid steering and punchy engine provide agile responses and a quick turn of pace.

We twisted our way down the western coast of Scotland for nearly 80 miles in darkness, while the Astra made mincemeat of rutted road surfaces. Soon, the amber haze of Cairnryan port appeared, and while our ferry was still docked, check-in for the crossing was slammed shut right in front of us. We’d missed it by minutes and would have to wait four hours for the next one.

Still, the delay at Cairnryan enabled us to turn the Astra into a temporary hotel room, and get some sleep. Very comfortable it was, too. But we discovered the setback would give us only an hour once we docked in Belfast to get through the city to Windsor Park – if we were to complete the journey in 24 hours. 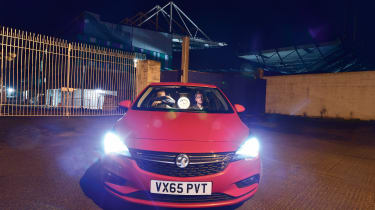 Even at 2am, you can rely on OnStar. A quick call back to Vauxhall HQ had the address downloaded into the sat-nav and within 30 minutes we were outside Windsor Park stadium – dishevelled, exhausted but ultimately relieved.

While the car wouldn’t have flinched had it needed to make the return journey immediately, we knew we couldn’t. The Astra had completed its task with ease.

Now we had to cram a month's worth of sleep in a day...