A low starting price, plenty of equipment and great fuel economy – what’s not to love about the Vauxhall Viva? 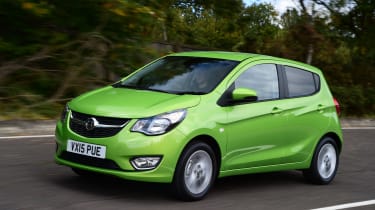 A low starting price, plenty of equipment and great fuel economy – what’s not to love about the Vauxhall Viva? It’s certainly a name with provenance, as the original Viva was wildly popular in the UK. The latest model is firmly in the well-established city-car mould, with a 1.0-litre, three-cylinder petrol engine producing 74bhp, but it’s attached to a very practical body.

The Viva is one of the few city cars with five, rather than four seats, and there’s plenty of room in the backseat for passengers. The result of this is a slightly small boot, but it’s not a big problem – few people will use their Viva for anything more challenging than a weekend getaway.

The base-spec Viva is better equipped than most of its rivals – cruise control, electric windows and mirrors, and steering-wheel mounted audio controls come as standard, while it’s only £495 to add air-conditioning.

The Viva is less capable on the motorway than some of its rivals – a long fifth gear aids cruising, but doesn’t help make the most of the meagre engine power. On some hills, you’ll have to change down. Another issue is the road noise, even from the small wheels.

The Viva is very cheap to buy, though, and rock-bottom running costs mean it will likely be very popular, especially with young drivers.