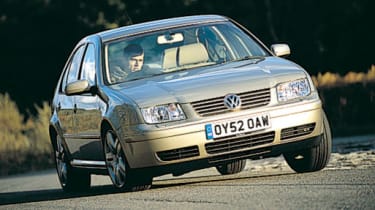 “It does what it says on the box. There's little in way of character, but it's definitely a car for those who need to do long journeys with a minimum of fuss.”

“It's a 130 PDi Sport Tiptronic. It does all that it should. It's very comfortable, extremely reliable, economic, has pretty good performance and has never broken down. It does all I expect with one exception....it could be quieter in the rear at motorway speeds. Almost five years old and I'm not thinking of changing it.”

Justifying its premium prices has always been a problem for VW. Most models in its range challenge for class honours, but if you want a cut-price alternative with similar strengths, you can opt instead for a VW-owned Skoda or SEAT. While the Czech firm's latest models trounce anything from VW in the Driver Power top 100, at least the German giant has trumped SEAT in the manufacturer rank.