It promises more luxury than ever, but has sixth generation of famous hatch been worth the wait? 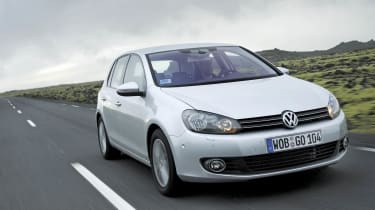 While the fresh look is best described as cautious, huge strides have been made in developing refinement. No rival in this class exudes the same degree of comfort and quietness on the move. Yet the driving experience has suffered, and the MkVI can’t quite offer the involvement of the MkV. But few long-distance motorists will mind, as the Golf will devour motorway journeys like an executive car.

Get ready for the drive of a lifetime! VW has unleashed its stunning new Golf – and Auto Express travelled to Iceland to see if it’s a winner.

As the famous family hatchback celebrates its 34th anniversary, its sixth major evolution has arrived. And the German company promises the newcomer will deliver unrivalled luxury and refinement.

To help substantiate those claims, our 2.0-litre TDI test car had an ultra-efficient engine and six-speed automatic gearbox, as well as touchscreen audio and navigation.

Flagship versions get computer-controlled suspension and a cruise control that scans the road ahead for slower traffic.

Up close, the bold new lights and revised grille give the Golf a sportier appearance than the MkV. But the changes represent an evolution rather than a revolution for the top-seller.

Inside, the difference is more obvious. VW makes much of the cabin which, as well as being lavishly equipped, gets fresh fabrics and trim, along with more comfortable seats. As before, there’s ample leg and headroom, and our five-door offered plenty of rear space.

The driving position is comfortable and provides a great view of the road ahead, while the chunky steering wheel in our SE-equipped car featured button controls for the sat-nav and climate control. On the road, refinement is impressive, too. At idle, the engine is virtually inaudible thanks to modifications VW has made to reduce vibration.

What’s more, performance and economy both remain competitive. The 138bhp oil-burner returns nearly 58mpg – which is 6mpg more than the previous model achieved – but also delivers a top speed of nearly 140mph and a 0-62mph sprint time of 11.2 seconds.

This is partly helped by the new dual-shift semi-automatic gearbox, or DSG for short. Although a six-speed manual transmission is also available, our test car was equipped with DSG, which provides near-instant up and downchanges.

Operated by steering wheel-mounted paddles, the ’box responds quickly to commands, sliding smoothly through the ratios. This aids poise and balance on winding, uneven roads – particularly under braking and when accelerating out of corners.

And even although the chassis is very similar to that of the 2004 Golf MkV, subtle but important changes to the design make it slightly stronger. This extra strength has been used in part to improve the car’s mid-corner stability, but is mostly aimed at upgrading refinement.

Coupled with the new, electronically controlled suspension that debuted on the VW Scirocco, it provides smooth, quiet progress which insulates the driver from harsh surface changes and potholes. But this new-found luxury has spoiled the steering, which lacks feel. We do, however, like the extra safety equipment which this Golf carries as standard. For the first time, there are knee airbags for the driver, bringing the total count to seven.

There is also a head restraint system, designed to reduce whiplash injuries, plus a revised and improved ESP electronic stability programme.

But the big question is: Has all this work really been enough to ensure the latest member of the Golf dynasty matches the high expectations of its fans?

When it comes to luxury and refinement, there’s no doubt this model scores a hole in one. However, the increased reliance on electronics to control the suspension and steering has robbed the car of some of its dynamic appeal.

Rival: Ford Focus A recent redesign improved the looks and refinement... but that’s not enough any more. The new Golf has opened a gulf between the two that’s unlikely to be closed any time soon.

Click here for the full report on the 1.4-litre TSI version of the new Golf