We've also driven the petrol version of Volkswagen's latest Golf and it's every bit as impressive as the diesel! 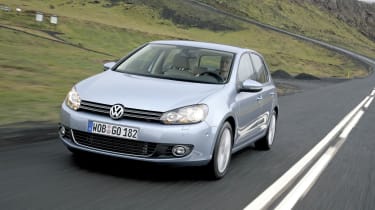 Car fans who combine a love of driving with keeping a close eye on running costs should love the 1.4-litre Golf MkVI. Its engine serves up real thrills – and great economy. With petrol costing much less than diesel, this Golf provides the best of a petrol engine with diesel-style economy.

Petrol power is fighting back! The new 1.4-litre turbo and supercharged TSI engine under the bonnet of this thrilling new Golf proves when it comes to economy and low running costs, diesel is not necessarily the winning choice.

The 158bhp four-cylinder unit, which packs an impressive punch, debuts in the latest MkVI model, on sale in the UK from January. The engine is the only production unit on the market with both a supercharger and turbo.

As well as offering a great blend of build quality and luxury, what makes this model even more exciting is that it returns nearly 45mpg on the combined cycle. Pound for pound, that makes it the most efficient performance petrol engine money can buy. Exhaust emissions are low, too, as the car produces around 145g/km of CO2.

To make the most of the power on offer, Volkswagen has fitted this TSI motor with a new seven speed semi-automatic transmission. It is called a Dual Shift Gearbox, or DSG for short, and is operated by steering wheel-mounted paddles. The set-up provides smooth, seamless changes.

The manufacturer has also fitted this car with Dynamic Chassis Control (DCC). This electronic system helps fine-tune the suspension to give a good blend of comfort and control. By pressing a button on the centre console, drivers can choose from one of three specific suspension settings – Comfort, Normal or Sport – to suit road conditions.

There’s no doubt that the 1.4 Golf MkVI is an impressive performer – and, in our minds, better to drive than the diesel. That’s partly down to the snappy responses of the engine, but the seven-speed gearbox and lighter engine are also responsible.

Prices for the newcomer are still to be confirmed. However, they are expected to rise by around £700 over the current machine, so buyers can anticipate paying about £18,000 for a well equipped version of the newcomer.

Click here for the full review on the 2.0-litre TDI version of the new Golf.