New petrol engine for VW Golf BlueMotion - but can it match diesel version for economy? 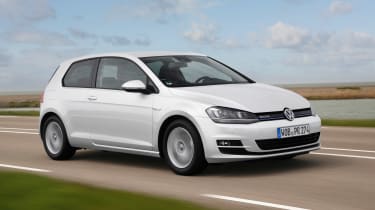 The new Golf BlueMotion TSI proves you needn’t sacrifice performance and refinement for running costs and low CO2. Just like every other iteration of the Golf, it’s practical and great to drive, but thanks to clever aero and weight-saving technology, won’t cost a penny to tax. The kit list looks a little stingy alongside its mainstream rivals, but you still get Bluetooth, air-con and the brilliant touchscreen infotainment system. It’s been a little while coming, but this new BlueMotion has been well worth the wait.

The Volkswagen Golf is one the UK’s most popular cars – and has been ever since its launch way back in the 1970s. Last year, VW shifted 73,880 - making it the fourth best selling car of 2014.

Now in its seventh generation, Volkswagen has been drip-feeding new variants since the model first hit showrooms in 2012. In recent months we’ve seen estate versions of the GTD and Golf R, as well as a four-wheel drive Alltrack with raised suspension and a GTE plug-in hybrid capable of 166mpg.

Not content, Volkswagen is now launching this BlueMotion TSI – its first Golf BlueMotion model with a petrol engine. It’s essentially a more powerful, turbocharged version of the dinky three-cylinder unit in the up! city car, with VW claiming all the benefits of a diesel, but without the upfront price penalties. 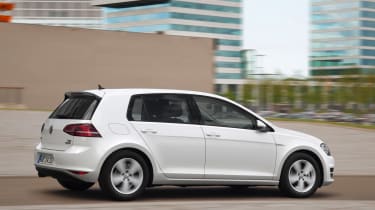 Prices start from £19,740 on the road, meaning the basic three-door is a considerable £1,695 less than the equivalent 1.6-litre BlueMotion diesel. While that’s ever-so-slightly more than the marginally thirstier £19,095 Ford Focus Zetec EcoBoost, it’s quite a bit cheaper than the diesel-only BMW 116d EfficientDynamics (£22,560). The more practical five-door Golf BlueMotion commands a premium of £655, while Estate and SV versions are also available.

All cars are based on the popular Match specification, so it looks pretty much like any other Golf on the road. However, just like its diesel counterpart, the BlueMotion TSI petrol makes do without Adaptive Cruise Control and the Front Assist braking system – changes to the grille and aerodynamics don’t allow for such functions.

That means 16-inch alloy wheels, manual air-con and Bluetooth connectivity come as standard, as well as VW’s brilliant touchscreen infotainment system. Interior quality is right up there with the best in class, surpassed only by the VW Group’s very own Audi A3. 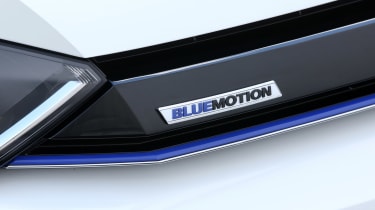 Official figures suggest this new model will return 65.7mpg, while emitting just 99g/km of CO2. That’s no mean feat for a petrol-engined family car – let alone one with such a small capacity three-cylinder engine. It’ll appeal to company car drivers, too, as it falls into the lowly 14 per cent BiK tax band and is exempt from the three per cent diesel surcharge. The BlueMotion TDI is still available, but with real-world running costs like this, we’d think twice before opting for the diesel.

The economy improvements come courtesy of various chassis and component tweaks – including a 15mm lower ride height, specifically designed aero grille, rear spoiler and underfloor panels. Low rolling resistance tyres also feature – all resulting in a 10 per cent improvement in aerodynamics over the standard Mk7 Golf. The engine is 15kg lighter than the equivalent four-cylinder, too, helping save weight and – as a result – fuel.

But don’t think all this results in sluggish progress. It’s got more torque per litre than the current generation Golf GTI, and it feels every bit as eager as the numbers claim. It’ll do 0-62mph in 9.7 seconds and hit 127mph flat out – offering punchy yet linear acceleration, despite the fact that peak torque comes in from 2,000rpm. 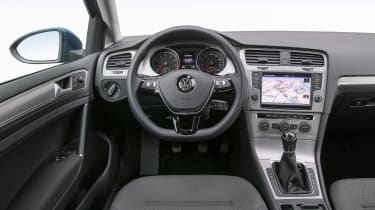 A six-speed manual gearbox is standard, ensuring the BlueMotion is just as quiet and composed as the larger-engined Volkswagens – seeming almost silent at motorway cruising speeds. Of course, you can also get the TSI BlueMotion with a seven-speed DSG auto, but in all honesty the slick-shifting manual is more than up to the job. It costs £1,415 less, too.

Unlike a number of the Golf’s eco-friendly rivals, the TSI is also incredibly comfortable. Despite the lowered suspension, the Golf BlueMotion strikes just the right balance between ride and handling, feeling perfectly judged at the national speed limit and nicely composed around town. This, matched to the superbly refined engine, makes it a worthy long-distance companion – and an ideal company car choice.