There will be two diesel versions of the Volkswagen T-Roc SUV in the UK, and we've tried the more powerful 2.0 TDI 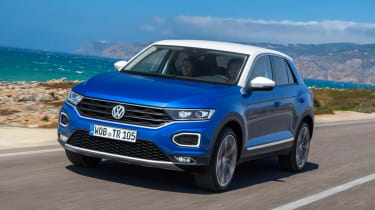 Some cabin quality qualms aside, the Volkswagen T-Roc cuts the mustard as a well-judged entry into the compact SUV market, with a combination of style and solid driving characteristics. Diesel models, and especially diesel models kitted out with all-wheel-drive, will probably turn out to be small sellers, however. This is mainly because the petrol options will be cheaper and better suited to the urban streets where the T-Roc will spend much of its life.

The market for small, family hatchback sized SUVs is red hot at the moment, but the new Volkswagen T-Roc is a little late to the party. It’s already got a number of rivals within the Volkswagen Group stable such as the Audi Q2 and SEAT Arona, while outside challengers come in the form of the MINI Countryman and the Mazda CX-3.

It’s a car we’ve already given a once over to, albeit in range topping trim with the car’s most potent engine – a turbocharged 2.0-litre petrol unit developing 188bhp. With the T-Roc looking set to quickly become one of the firm’s prize breadwinners though there’s a broad range to choose from. Tagging alongside the three petrol options, UK buyers will get a choice of two diesels, the more potent of which we’re testing here.

Diesel T-Rocs will play a supporting role when it comes to sales. Volkswagen predicts that as many as eight out of ten T-Rocs sold will be petrol powered, with the 1.0-litre TSI model the headline act. 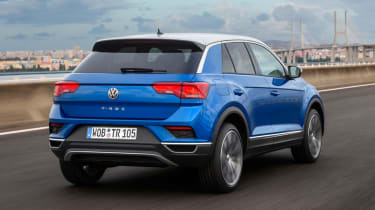 Diesel versions will still find homes when they go on sale in the UK early next year though, and the more powerful of the two options – a 2.0-litre TDI unit producing 148bhp has been included to sit above the 114bhp 1.6-litre option.

With the most torque of any T-Roc we’ll get in the UK – before the anticipated arrival of the hot T-Roc R – it certainly feels like a gusty motor when prodded into action, and the performance figures quoted by Volkswagen feel realistic. In the UK, this range topping diesel option will be offered with a six-speed manual gearbox and front-wheel drive as standard, but the optional DSG automatic will be paired exclusively to 4MOTION all-wheel-drive.

It’s as smooth swapping cogs as you’d expect, but it does have a habit of clinging onto third gear and keeping the revs at a level that feels too high at town speeds. The unit itself is still impressively refined though, with the diesel drone only seeping noticeably into the cabin with a deep push on the throttle, so noise is relatively controlled at cruising speeds. 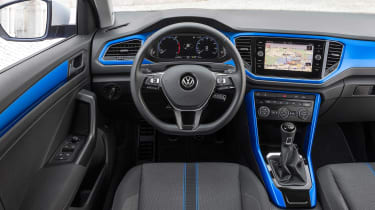 With claimed fuel economy of 55.4mpg, the 2.0-litre TDI isn’t actually any more economical on paper than the 1.0-litre TSI petrol unit Volkswagen believes will be its biggest seller, and with 133g/km CO2 emissions it’s dirtier as well. As a result, buyers who are unlikely to venture beyond the urban jungle should follow the crowd to the base petrol that will suit their needs when it comes to efficiency. Of course, the diesel achieves that figure with more power and torque, plus the option of all-wheel-drive, so it should find a market with buyers demanding a bit more from their new T-Roc.

All-wheel-drive is a no go for T-Roc buyers seeking to maximise practicality though. The 445-litre bootspace quoted for front-wheel-drive models is eaten away by the addition of the 4MOTION system, resulting in a shallower boot with 392-litres of space.

Style is oh so important in this segment, and there’s no doubt that Volkswagen has invested plenty of time developing the T-Roc’s image. Much like the Audi Q2, it sticks out alongside the cars it’ll share forecourt space with thanks to a sharper, funkier look, giving it a more individual character. 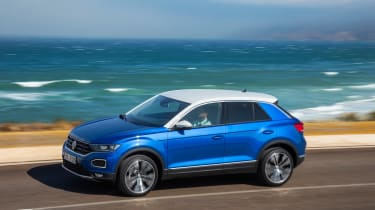 The youthful feel is also evident inside with a sharply shaped, clean looking dashboard featuring body coloured trim inserts on some models, injecting a bit of vibrancy into the cabin. However, and as we’ve said before, the plastics on show are a let down – almost everything at hand level is hard and scratchy, which is a bit of a departure from a brand that has built its name on delivering quality regardless of segment or price. Even the European spec Design trim level car driven here – more or less equivalent to SE L spec in the UK – doesn’t get a materials upgrade.

That aside, the T-Roc package is just as you’d expect – another steady Volkswagen entry into a new market segment. While there’s nothing seriously amiss with the diesel, however, it’s likely to be unnecessary for most buyers.