The VW Tiguan is a popular alternative to the Skoda Yeti, with smart styling and a wide range of engines 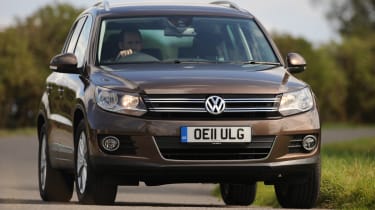 Given the fact that the Volkswagen Tiguan combines the usability of the Golf with desirable SUV features, it’s no wonder the tall-riding crossover is a favourite among UK buyers.

Despite it getting a little long in the tooth these days, the Tiguan is still a top choice in the increasingly popular crossover SUV market. That’s down to a smart interior, quiet engines and an expansive trim range.

On the engine front, you can only choose from three different power variants of a 2.0-litre TDI diesel. The 108bhp version is reserved for the S trim only, while the most powerful 181bhp version is four-wheel drive only. The middle-of-the-road 148bhp diesel offers the best blend of power and economy. However, the Tiguan’s relative age and the upcoming release of a new model mean the Tiguan isn’t as economical as cars like the new Renault Kadjar or Honda HR-V.

The Volkswagen Tiguan comes in four-wheel and front-wheel drive versions, both being comfortable and enjoyable to drive. Thanks to great adjustability in the driver's seat and steering wheel, visibility is great and it's easy to find the ideal driving position.

In terms of engines, the diesels make the most sense as they're more refined and offer the best mix of economy and performance.

The Volkswagen Tiguan feels more comfortable on-road than off, but Escape versions do come with a higher front bumper and hill descent control for maximum traction over challenging terrain.

As you'd probably expect, if you opt for four-wheel drive or an automatic gearbox you'll see a significant impact on running costs.

Rivals such as the Skoda Yeti and Mazda CX-5 definitely offer more in terms of efficiency and economy. But Volkswagen does provide a range of fixed-price servicing deals and all Tiguans come with a three-year, 60,000-mile warranty.

The Volkswagen Tiguan may not stand out as much as premium rivals like the Range Rover Evoque or Porsche Macan, but a 2011 facelift did at least bring it inline with the latest VW look. It introduced a sleeker front bumper, a more intricate headlight design with daytime running lights and LED taillights.

Volkswagen Tiguan S models are a bit sparse, so we'd opt for Match versions, which get a colour touchscreen sat-nav, climate control and front and rear parking sensors as standard.

Escape models come with underbody protection for those wanting to make the most of the off-roading experience. Range-topping R-Line cars get bi-xenon headlights, 18-inch alloy wheels, sportier front and rear bumpers plus two-tone sport seats.

Despite its compact dimensions, the Volkswagen Tiguan is a very spacious car. There's 470 litres of boot space on offer - that's better than the Nissan Qashqai's and the Skoda Yeti's.

If that isn't enough, the rear seats slide and recline, allowing more space for extra luggage or legroom as required. You can even fold the rear seats flat, creating a total load area of 1,510 litres. A high loading lip does let it down a little, though.

Inside, there's plenty of room for five adults to sit in comfort, with generous headroom and legroom throughout. Escape versions even come with underbody protection and a different front end - so you don't need to worry if you fancy taking it off-road.

The Volkswagen Tiguan finished a lowly 102nd out of the 200 cars that scored in the 2015 Driver Power survey, which may be partially down to the car's age. Volkswagen took 22nd position out of the 32 manufacturers rated.

All parts are tried and tested, and the Volkswagen Tiguan even shares components with the reliable Volkswagen Golf.

On top of this, the Volkswagen Tiguan received the full five-star rating in the Euro NCAP crash safety tests, with a score of 87 per cent for adult occupant protection and 71 per cent in the safety assist category.