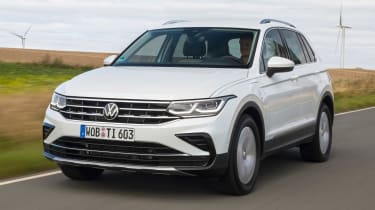 This new plug-in hybrid version of the Tiguan could be a hit with company car buyers if the price is right, combining low running costs, relaxing driving characteristics and, in all probability, a low Benefit-in-Kind rating when it arrives in the UK next year. Performance is good too, while the eHybrid doesn’t stress its green credentials; it feels entirely conventional and thoroughly a part of the regular Tiguan family. Its straightforward nature could make it an alternative for regular diesel buyers too.

While the regular Volkswagen Tiguan line-up has been given a significant overhaul, perhaps the biggest news is the addition of the hot 316bhp Tiguan R and this Tiguan eHybrid, which introduces plug-in hybrid power to Volkswagen’s big seller for the very first time.

This is completely new territory for the Tiguan, but the technology underpinning this new company car tax-busting option is very much a known quantity, used already in the Volkswagen Golf and Passat GTE models, as well as the latest Skoda Octavia vRS.

The system comprises a 1.4-litre four-cylinder turbocharged petrol engine mated to a 13kWh battery pack and an electric motor, mounted on the end of a six-speed DSG automatic gearbox. Its total output is 242bhp and 400Nm of torque, and though final figures have yet to be confirmed, Volkswagen tentatively claims that it’s capable of running on the battery alone for 31 miles.

It all sounds simple, and in practice it feels it. This is a straightforward, no-frills plug-in hybrid SUV that won’t take much getting used to for buyers, and depending on the price (yet to be confirmed), it could tempt diesel customers looking for frugality, too.

Volkswagen hasn’t confirmed any fuel economy figures yet, but the official numbers will likely just trail those of the new Golf GTE, meaning WLTP claimed CO2 emissions of around 40g/km and a Benefit-in-Kind rating of around 10 per cent. Miles per gallon should sit comfortably into three figures too, though as ever, getting anywhere near this sort of figure requires very attentive driving and consistent recharging of the battery, which takes three and a half hours to replenish at a maximum AC rate of 3.6kW. Using the infotainment screen or the VW We Connect App, the owner can plug in at home but choose to start the recharge at a later time, when electricity is cheaper. 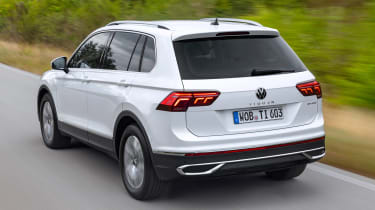 With no effort to be frugal, we managed to coax 44mpg from the hybrid Tiguan; that’s more than in our time with the 2.0-litre TDI. And it’s a much more refined package too, the coarser edge of the diesel engine replaced by the quiet hum of the electric motor at low speeds and the seamless introduction of the petrol engine when called upon. All things considered, it’s a relaxing car to drive.

Hit the E-mode button on the drive selector and the Tiguan eHybrid reverts to pure-electric mode (the default setting on start-up if there’s enough charge in the battery), and it can cruise on battery power alone at up to 81mph. So if you have a short motorway commute, you could complete it without needing the petrol engine at all.

The Golf and the Passat with this engine both receive GTE badging, and the Tiguan doesn’t forget this. A GTE button combines the petrol engine and electric motor to the max, unshackling all 242bhp and 400Nm for a strong turn of pace; 0-62mph is completed in 7.5 seconds, and the extra weight of the hybrid drivetrain doesn’t feel sapping. It’s only really felt in corners.

You can also modify battery settings on the move, pausing consumption to keep some charge in reserve for later in the journey, setting a lower limit of which the battery will save, or use the petrol engine to recharge the battery during your journey. Use the navigation system for a journey, and it will analyse GPS data to determine when best to use the battery and when best to rely on petrol power, with no input at all from the driver.

Elsewhere, the updated Tiguan package carries through with the exterior styling changes, new infotainment, and on Elegance spec cars like ours, standard 10-inch digital instruments and LED matrix headlights. The integration of the battery pack under the rear bench has had a knock on effect on practicality, however; boot space is down by 139 litres, to 476 litres.