Distinctive, stylish and nicely finished, with only a few weaknesses

Volvo estates used to be the epitome of the firm’s boxy styling, but the V90 builds on the company’s latest look to be one of the best-looking estates on the market.

Many of the V90’s design features, such as the Thor’s Hammer running lights, imposing front grille and muscular shoulder line, are shared with its S90 saloon cousin. However, from the B-pillar back you’ll discover that Volvo’s designers have done a neat job of integrating a more upright estate car rear.

The V90 gets a steeply raked tailgate that’s clearly intended to boost the car’s kerb appeal rather than improve practicality. The eye-catching vertical tail-lights that stretch from just above the bumper to the roof only enhance this impression.

For many buyers the sacrifice of space for style will be worth it, as the V90 is a real head-turner. Strong proportions and neat detailing combine to give the Volvo real presence. The standard wheels are 17-inchers on the D4 Momentum editions, rising to 18in items on all versions of Inscription - but Volvo offers a range of 19in and 20in items as options on all trim levels. There’s no doubt that the V90 has a more sporty, classy look on the larger wheels - but it doesn’t look particularly under-tyred on the 18-inchers.

The Cross Country will suit those after a less brash alternative to an SUV. With 65mm added to the ride height and a wealth of plastic lower body cladding and skid plates, it looks imposing enough for people to notice it isn't a regular V90. It's also much lower than an XC90, which will suit some (but not all). Inside it, however, you'll struggle to spot any differences. 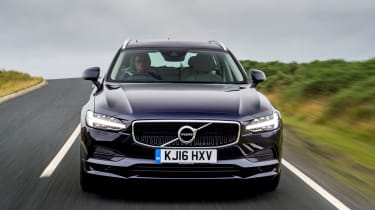 Two solid colours are available at no cost, but most V90s will be specced with one of the eight metallic finishes and two ‘premium metallic’ shades.

Inside, the V90 builds on the dashboard architecture and materials quality of the XC90, with leather as standard even on Momentum. Inscription gets a plusher Nappa material. The quality is right up there with the best in the executive estate class because, while there are harder, scratchier plastics, they’re generally well enough hidden.

The highlight of the interior is the huge nine-inch touchscreen tablet. This intuitive and clearly laid-out unit controls almost everything, including entertainment, navigation and ventilation.

As a result, there are only a handful of buttons elsewhere on the facia, which helps give the car a minimalist look and feel. Elsewhere, light wooden veneers run the width of the interior and flow back on to the doors, while the hugely supportive multi-way adjustable seats are covered in soft leather.

THE V90 has a nine-inch tablet-style screen as standard. It’s not as big as the displays in a Mercedes or BMW, but the portrait orientation makes it less of an issue.

Everything is controlled by the touch-sensitive screen, so it’s similar to an iPad – although it can sometimes lag behind your inputs. It offers lots of features, including traffic info and, in R-Design Pro trim, Volvo’s On Call app. This allows you to send destinations from your phone to your car and will help in emergency situations or breakdowns by ringing 999 or a recovery service. 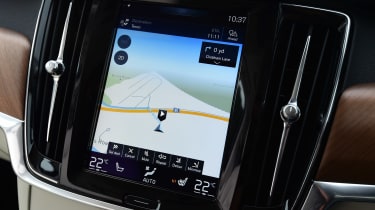 A 12.3-inch digital dash showing the sat-nav map is standard, while there's a £3,000 optional Bowers & Wilkins stereo, which delivers a punchy sound thanks to its 1,400W amplifier and 18-speaker set-up, including a subwoofer. Connectivity is good, but you have to pay for it as Apple CarPlay and Android Auto are part of the £300 Smartphone Integration pack. Like the BMW 5 series, this seems stingy on a £40,000-plus exec car.

One negative point is the relative scarcity of USB sockets; there’s only a single one up front, so rear passengers don’t even have the option of charging, let alone feeding their music through to the car’s stereo. Volvo says it is working on offering an aftermarket kit to fix this - but it’s likely to be no more than a charger, leaving those in the rear seats frustratingly disconnected from the in-car entertainment.