Capable enough, but it’s strange for a Volvo wagon to no longer be the biggest load-lugger in the class

There’s no way of avoiding this, so let’s just get it out of the way: Volvo’s big estate is no longer the biggest load-carrier in the class. The V90’s 560-litre capacity is a significant 80 litres down on the Mercedes E-Class Estate, and while the back seats fold flat at the touch of a button, the expanded volume of 1,526 litres is 294 less than that of the E-Class.

In a paradigm shift from the days of the 760 and V70, the V90’s load capacity is beaten by most of its rivals, including the BMW 5 Series Touring and Audi A6 Avant - and dwarfed by the likes of the Mercedes E-Class Estate.

In fact, with the rear seats in place the V90’s boot is actually marginally smaller than the V70’s; the relatively rakish angle of the rear hatchback is to blame.

The V90 is not a small car; indeed, it is one of the bigger vehicles in the executive estate class. At 4,936mm and 1,895mm, Volvo’s offering is around three centimetres longer and wider respectively than both the 5 Series Touring and E-Class Estate. The Volvo’s roof sits slightly lower than the other pair’s, though - at 1,475mm, it’s a centimetre lower than the BMW and three centimetres down on the Mercedes. 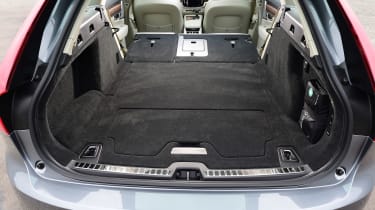 While the V90 isn't the largest estate in the class, the load bay should be big enough for most users. With the rear seats in place there’s 560 litres on offer - and with them lowered, the capacity extends to 1,526 litres.

By comparison, the BMW 5 Series Touring’s boot extends to 1,620 litres when the seats are folded down, and the biggest wagon of all, the Mercedes E-Class Estate, can manage a whopping 1,855 litres.

At least the Volvo’s space itself is pretty clever, with a nice flat floor to slide big loads on and conveniently placed handles to drop the rear seats without having to open the back doors. Volvo’s flap to stop shopping sliding around and gas struts to support the lid for underfloor storage are neat touches, too. Keyless entry and a powered tailgate also feature. Neat touches include the Family Pack which costs around £400 and adds a pair of integrated child booster seats to the rear bench.

Inside the cabin, there are few grumbles. There’s decent room in the rear for three adults, although the middle seat is pretty thin and has less lateral support than the other pair. Two grown-ups will have more than enough space in the same area, though, and headroom is decent in the front and rear; this would be a comfortable car for four six-footers on a long journey.

The tapering roofline does make it a little darker in the rear cabin than it would be in an E-Class Estate, mind you, and it also means that while front passengers can get in and out easily, taller rear occupants may need to dip their head slightly as they jump aboard. It’s far from an awkward squeeze, though - to the point where you may not even notice it unless you’ve had lots of experience travelling in an E-Class or a 5 Series Touring. 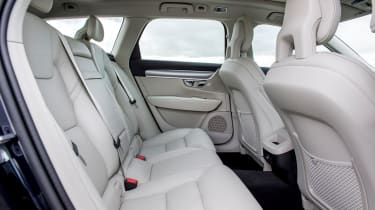 There are two ISOFIX points in the outermost rear seats, and they are relatively easy to access; you simply flip up or remove plastic tabs covering the mounting hooks, so you don’t have to worry about your seat chassis snagging on the base of the seat back.