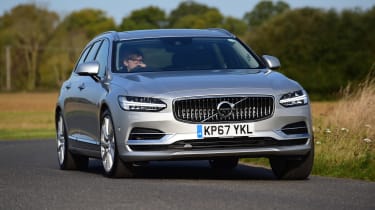 If you’re after a high-performance, premium plug-in estate car, this new Volvo V90 T8 sits happily in a class of one. Rivals from BMW and Mercedes are only available in saloon guise, while the cheaper Volkswagen Passat GTE Estate is smaller and less luxurious. And despite not feeling as fast as the figures suggest, the Volvo offers a convincing blend of space, quality and performance, along with rock-bottom company car tax and a usable electric range.

There has been a lot of noise coming from the Volvo camp in recent months. Alongside the standalone (for now) spin-off Polestar 1, the brand’s commitment to a fully electrified future has the Swedes on a focused path to zero emissions.

In the here and now, however, Volvo’s mission is much simpler: offer those in the premium market something different to the German norm. It’s a challenge the maker is taking in its stride – and the S90/V90 duo is a part of that success story.

Launching in the summer of 2016, the car you see here stepped straight into the executive estate class as a key player, thanks to its winning combination of comfort and class. 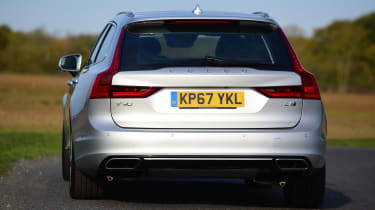 Initially available with a choice of just two (D4 and D5) diesel engines, the 90 range has now been boosted by the addition of a T8 hybrid. And although the likes of Mercedes and BMW offer plug-in versions of their mid-size saloons, Volvo reckons that the technology is appropriately fitted to its load-luggers, too. It’s unique in this segment, in fact, unless you look towards the cheaper but beautifully built Volkswagen Passat GTE or value-packed Kia Optima Sportswagon PHEV.

Volvo claims the V90 will do 28 miles on electric power alone, putting it on par with the three-box BMW 530e. The efficiency figures are identical, too, with a claimed 141.2mpg and 46g/km CO2 emissions.That results in a rock-bottom nine per cent Benefit-in-Kind tax rate for company car drivers, again matching the BMW – as well as the similarly priced Mercedes E 350 e.

But since the Government brought in its VED tax hikes, the appeal of plug-in has somewhat diminished for private buyers. As the V90 falls under the £60,000 threshold for the plug-in car grant, it is eligible for a £2,500 saving, but whether you’re looking at list price or PCP, it appears expensive. 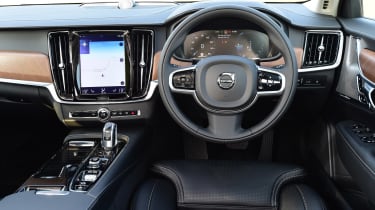 Still, putting cost to one side for a moment, how does a Volvo estate with over 400bhp perform? Unsurprisingly it’s still a refinement and comfort champion, feeling hushed and smooth at cruising speeds.

Previously, we’ve warned against kitting your V90 out with larger wheels, but on our car’s 19-inch rims, the base version’s supple ride is largely retained. However, it’s worth noting that this test model came with rear air suspension, which even in the heady heights of Inscription specification remains a £1,500 extra.

While it’s easy to salivate over the T8’s power and torque numbers, one key figure puts a dampener on things. At 2,011kg, this is a heavy car. As a result, the performance specs (0-62mph takes just 4.8 seconds) feel a little ambitious from behind the wheel. 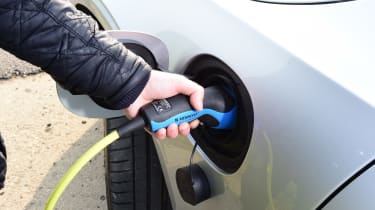 On the other hand, the electric injection means the V90 T8 is incredibly quiet at town speeds. The car will operate in Hybrid mode by default, using the power of the electric motor driving the rear wheels for crawling and low-speed driving. Those wanting to lean solely on the battery and motor can flick the V90 T8 into its Pure setting, which maximises electric usage up to 78mph.

Of course, the T8 gets the same luxurious cabin as a diesel V90, with a feature-filled portrait touchscreen and high-quality dash.

Crucially for estate buyers, this is still a practical family car. While the much cheaper Passat Estate offers a 483-litre boot, the V90 is far bigger. The T8’s 560-litre load bay is identical to that in the diesel cars, and folding the rear seats offers a total of 1,526 litres.