Can the classy new BMW 5 Series Touring make a big impression as it meets Mercedes E-Class Estate and Volvo V90? 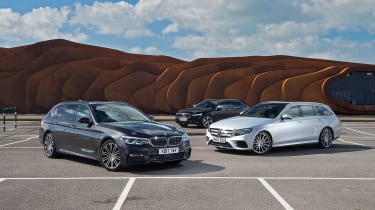 It’s round two for the BMW 5 Series. In saloon form, the four-door exec walked off with road test victory, unseating the Mercedes E-Class from the top spot. Now it’s the turn of the 5 Series Touring.

If you need extra space, is this five-door estate the best wagon you can buy? And can the new BMW 5 Series Touring pull off a victory like its saloon sibling?

It’s facing two tough competitors in the form of the Mercedes E-Class Estate and the Volvo V90. As with the 5 Series Touring, both are packed full of technology, offer lots of luxury, feature efficient four-cylinder turbodiesel engines and – importantly in the estate sector – provide even more space and practicality than their saloon alternatives.

Yet while versatility is important, a modern executive estate car has to be so much more than just a big box and an engine.

All three cars here lay claim to offering far more than this. So which estate serves up the best combination of these essential attributes to edge ahead of the competition? 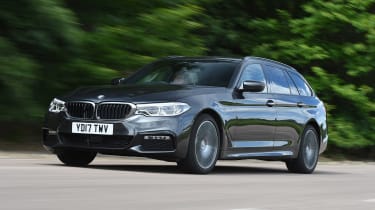 BMW’s 5 Series Touring is only available in two trim levels: entry-level SE and M Sport, which we test here. All cars use the firm’s eight-speed auto box, so the 520d M Sport comes in at £41,385.

IT weighs only 35kg more than the saloon, at 1,660kg, so the 5 Series Touring is remarkably similar to drive to its sibling. With the Variable Damper Control in its softest setting the 520d rides smoothly but with plenty of control, absorbing imperfections in the road with a supple edge, even on fairly large wheels and low-profile tyres. 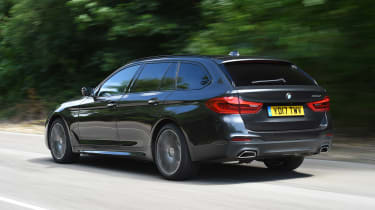 Switch to Sport mode and the compliance is still there, with the chassis dealing with undulations well. However, the softer edge is replaced by firmer damping, with tighter body and wheel control that means you can really exploit the grip the BMW’s chassis serves up – but in total security.

The steering is the best here – none of these cars offers much in the way of feedback, but the BMW’s is the most precise, and allied to its grippier chassis, it’s the most involving choice. This is true even in day-to-day driving, while the comfort and ride quality edge it ahead of the Mercedes.

BMW’s 187bhp 2.0-litre turbodiesel almost matches the chassis’s 7 Series-like refinement. It is much improved and the quieter engine here, and with 400Nm of torque its performance is spot on. 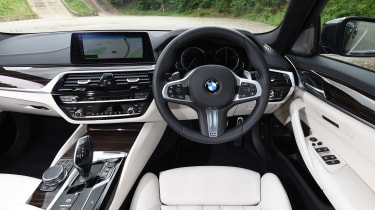 On test the 520d sprinted from 0-60mph in 7.8 seconds. This was two tenths slower than the more powerful Mercedes, while it trailed the Volvo by half a second. However, it’s not enough to make a difference on the road as the 5 Series’ in-gear performance is on par with its rivals.

This is where it counts, and with the eight-speed automatic gearbox handling changes smoothly and rattling through gearshifts quickly in manual mode using the paddles, the 5 Series is the most comfortable, refined car of the three on test here.

Testers’ notes: “It doesn’t take long to realise the 520d is the most involving car to drive, but the new platform and adaptive suspension also make it extremely comfortable.” 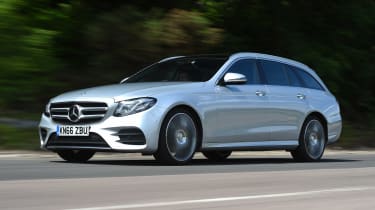 The current E-Class represented a huge leap for Mercedes. It combines a lot of tech with a high-quality cabin to offer masses of space in an appealing and – compared with its rivals here – cheaper package. This E 220 d Estate in AMG Line trim costs £41,215, undercutting its rivals by a small margin. However, can it put a greater distance between the BMW and Volvo?

While the BMW rides sweetly on its 18-inch alloy wheels, the Mercedes has 19-inch wheels as standard. Our test car came on £595 optional 20-inch items. These do affect the ride quality as the E-Class feels a little harsher than the 5 Series over the same surfaces. 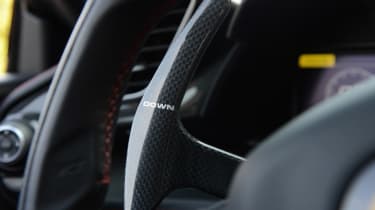 You notice bumps more, sometimes by the resounding thud, but on faster A-roads and motorways the E-Class feels more at home. The chassis copes with gentle, rolling tarmac well, allowing the body to float over less severe imperfections to deliver a decent level of comfort, but you’re never too far from a harsher impact due to the larger alloys and low-profile tyres.

The Mercedes isn’t as capable dynamically as the BMW, either. There’s still a good level of grip, but the chassis feels more inert and less agile, taking longer to respond to your inputs – especially when it comes to changing direction. 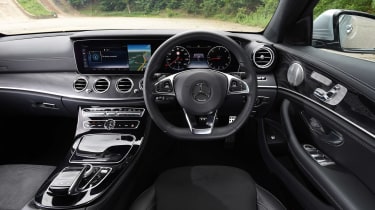 However, the car does deliver strong straight-line performance. With 191bhp and 400Nm of torque produced at the lowest engine revs (1,600rpm), the Mercedes accelerated from 0-60mph in 7.6 seconds.

Thanks to the nine-speed automatic gearbox it’s serene at speed, although it’s not quite as snappy as the BMW. While the new engine is definitely more refined than its predecessor, it’s also no quieter than the 5 Series and gets a little rattly at the top end. But use the low-down torque rather than stretching the 2.0-litre unit and the E-Class is a relaxing car. 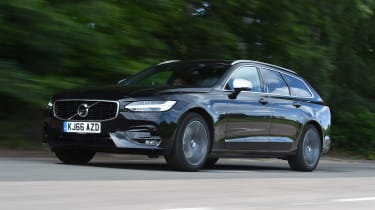 Since the V90’s launch, Volvo has tweaked the line-up, adding an R-Design Pro trim level to match BMW and Mercedes’ sportier models. With our £41,865 D4-engined test car, can the V90 continue to carry the torch for the Swedish brand against its talented German opposition?

The V90’s 2.0-litre turbobdiesel engine matches the BMW’s output with 187bhp, and 400Nm of torque is produced at the same 1,750rpm. However, it feels quite different on the move. 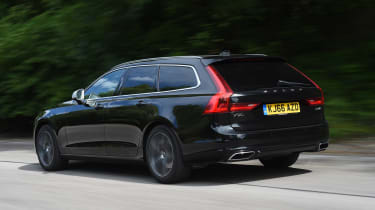 The Volvo’s unit is noisier, especially if you rev it – and you need to do that to extract the performance as the gearbox holds on to ratios longer, while shifts aren’t quite as smooth as in the BMW or Mercedes. Even in the more driver-focused R-Design you don’t get steering wheel paddles, either. Despite jerkier full-throttle shifts the V90 was the fastest car from 0-60mph, taking 7.3 seconds.

The car is on the firmer side, too, in R-Design Pro trim, especially with its sportier chassis settings. It has plenty of grip and fairly fast steering, so it’s more agile than the E-Class, but it doesn’t feel quite as alert or adjustable as the BMW, and neither does it have as much compliance in the damping. 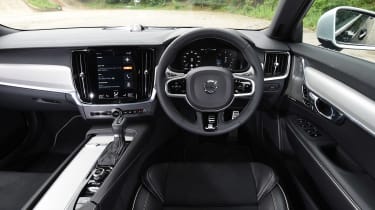 The suspension controls body movement well but struggles a little more with mid-corner bumps when the car is loaded up. The drive modes have less of an effect on how the V90 steers and handles compared with its rivals, too. But it’s still lovely to cover long distances in, as the dampers serve up enough composure that only big jolts and expansion joints at higher speed affect comfort – and even then it’s controlled relatively well, just lacking that final degree of finesse compared with the BMW.

Testers' notes: “All these cars follow a similar formula, but the Volvo has a different feel to its more reserved German rivals. If individuality is important, the V90 is certainly worth a look.” 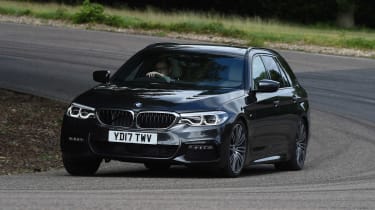 The 5 Series Touring follows the saloon version, taking victory thanks to its blend of comfort, agility, efficiency and space. It’s affordable on finance and will be the cheapest car to run for business users. It might lose out to the E 220 d on luggage room, but it’s larger inside and has an even higher-quality feel, with all the kit you’ll need. More refinement than its rivals makes it our winner. 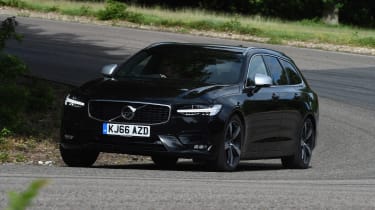 Like with the XC90 SUV and the S90 saloon, the V90 proves Volvo can cut it with the best in the class. It’s not quite as practical as its rivals here, but it makes up for it in other areas, with the most equipment, reasonable running costs and a surprisingly sweet chassis that balances handling and comfort well. However, it’s a step behind the BMW when it comes to refinement. 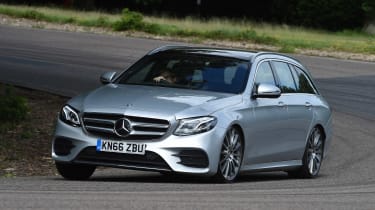 Third place might seem harsh, as the E-Class offers what you want from an exec estate. It’s spacious, practical, has plenty of comfort and is loaded with tech – only it doesn’t deliver this as convincingly as the BMW. The ride isn’t as composed and it’s not as involving to drive. Factor in pricey options and, unless ultimate space is a priority, the BMW is more accomplished. 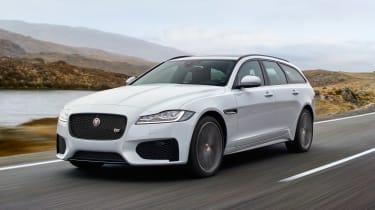 Jaguar has revealed its answer to the BMW, with the XF Sportbrake. It has a 178bhp diesel and a 565-litre boot. The car’s promised agility plus impressive practicality will make it a driver-focused 5 Series alternative.