Performance is good, but the XC60 is more about relaxed progress than sporty handling – it’s what Volvo calls ‘inspired confidence’

The Volvo XC60’s Scalable Product Architecture (SPA) platform means it shares a lot of parts with the larger XC90 SUV, and both models also use the same set of four-cylinder engines. There are no six-cylinder versions of the XC60, with Volvo instead relying on hybrid power and big turbochargers to compete with larger-engined rivals for pace.

At the front, double wishbone suspension helps improve agility and comfort on the road, while the integral-link rear set-up with a transverse leaf spring helps to keep weight down and improve boot space. Volvo offers an Active Four-C Chassis system as standard on the R-Design Pro and Inscription Pro, which adds adaptive dampers and air suspension at the rear. However, it's a £1,500 option for all other trim levels.

Bumpy British roads provided a tough test when we tried the air suspension, but the XC60 tackles this sort of tarmac with a reasonable level of composure.

In the suspension’s Comfort mode, the XC60 balances agility and comfort well. It’s not perfect, and on the R-Design model’s larger alloy wheels the Volvo can lose its composure when it hits a bump while cornering. But overall the car still plots a nice trajectory between involvement and ride comfort.

Most of the time it floats over rough ground, with only the occasional harsh intrusion felt inside the cabin. This is helped no end by adaptive suspension, which features adjustable modes, although you don’t need anything more than the Comfort setting. In comparison, the BMW X3 and Jaguar F-Pace deliver sweeter handling, although the Volvo doesn’t do away with agility completely.

The steering is lighter in the Scandinavian SUV than its rivals, but it’s well weighted and it’s enough to give confidence in placing the car. It does lag behind its rivals a little when it comes to dynamic ability and enjoyment. However, in this class it’s not such an issue, because owners will be more interested in ride comfort; so it’s a shame that the XC60 feels a little harsher than the X3 on rougher roads. 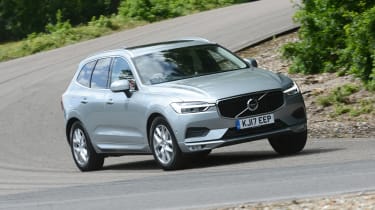 Most XC60s come on steel springs which Volvo says will translate to a firmer ride. Visibility all around is good, making the car easy to drive around town, although myriad sensors and cameras are there to protect you.

The Volvo's steering isn't as fast or responsive as an Alfa Stelvio's, but the steering is light and nicely geared given the size and weight of the car, so the XC60 feels agile enough.

The B5 petrol and diesel models offer mild-hybrid technology and you can have it with front or four-wheel drive. At the heart of the system is a starter/generator that uses 48V technology to harness electricity that would otherwise be wasted under braking, and then gives it back to the engine during acceleration. The idea is that this energy helps the car to improve fuel economy, without the need to plug it in.

Although it’s the diesels most people will go for, the T6 and T8 Twin Engine plug-in hybrids grab the headlines with their impressive performance and economy claims – and sizeable company car tax savings.

The diesel models come in the form of the all-wheel-drive B4 and B5, with 194bhp and 232bhp respectively. Both provide swift acceleration, although the B5 takes the sprint crown, delivering a 0-62mph time of 7.1 seconds.

The 250bhp output of the front-wheel-drive B5 petrol version is good for a 7.0 second 0-62mph time, while the 4x4 variant is a tenth quicker. If you want to move into hot hatch territory then the 296bhp B6 model could provide the answer, as it dispatches the same dash in a little over six seconds.

Volvo's 'Recharge' lineup of plug-in hybrids includes the 335bhp T6, 385bhp T8 and 399bhp T8 Polestar Engineered models, with all being capable of reaching 62mph from standstill in under six seconds.