Another stunning Volvo interior that’s well-made, looks great and is dominated by a fantastic 9-inch touchscreen

There’s a good reason why the XC60 looks a bit like a smaller XC90; it’s based on the same Scalable Product Architecture (SPA) platform as the seven-seater. It lives up to its name and really is scaled down. It’s easy to see the design similarities as well; the ‘Thor’s Hammer’ headlights, large grille and prominent Volvo badge are all still present.

From an interior design and quality point of view, the XC60 leads the class. This is another stunning Volvo interior, dominated, as usual, by a large nine-inch portrait-oriented touchscreen in the centre of the dash. There's also an impressive 12.3" driver's information display.

Every model gets leather seats, while there’s more leather elsewhere around the cabin and subtle amounts of chrome to lift things. You can choose various finishes, all with a cool Scandinavian feel to them, while the tiny Swedish flag on the driver’s seat is joined by a tiny metallic one just beneath the vent on the passenger’s side – nice details.

The plastics around the cabin all feel really good, too, apart from the lid of the glovebox, which is surprisingly cheap. 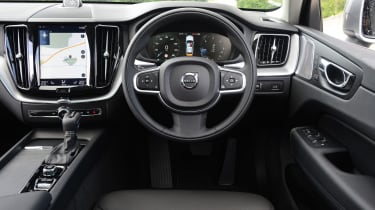 The first thing you’ll notice about the Volvo’s infotainment system is the nine-inch tablet-style portrait display. It’s fitted as standard and looks hi-tech, a bit like a tablet that’s been integrated into the car’s dashboard. It operates in the same way, using swipes and light touches just like your smartphone. That’s not always such a good thing in a car, though.

Touching the screen requires taking your eyes off the road, and while the Volvo’s set-up is more responsive than a Jaguar F-Pace's, it occasionally doesn’t respond to your inputs. Sat-nav, DAB and Bluetooth are standard, but you have to pay extra for smartphone connectivity; it’s £300 in the Volvo, but at least it adds both Android Auto and Apple CarPlay, rather than just the latter.

The £2,500 Bowers & Wilkins stereo upgrade is absolutely superb, but it’s very expensive and will only be worth it for those who are serious audiophiles.