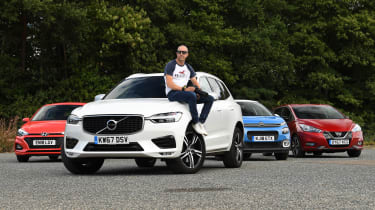 Our Volvo XC60’s comfort and refinement ensure driving to and from road tests is very relaxing. It’s so pleasant to drive that it can make even the M25 bearable on a morning commute, and that’s high praise indeed.

Hopefully you’ve already enjoyed our comprehensive road test of the Hyundai i20, Nissan Micra and Citroen C3 hatchbacks. As you might have guessed, I took the pictures that day – and while I prefer the superminis’ bright colours to the plain white of my Volvo, the Swedish SUV is still a favourite of mine.

That morning, like most when I’m working on road tests, I had a long, early-start drive around the M25 in the XC60 I’m running on our fleet. As those who live near London will understand, I can’t stand that motorway, but doing the trip in the Volvo is one of the only ways to actually enjoy it.

I’ve written before about the car’s smooth ride, which means even the rougher parts on the M25’s southern stretch don’t get on my nerves. The XC60 also remains quiet and calm on the inside, even when you’re driving at speed over nasty surfaces; road noise is rarely a problem for me any more. 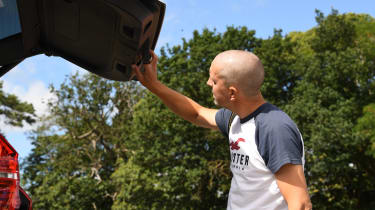 The D5 is actually a four-cylinder diesel, so I’d expected it to be at least a little grumbly. You can hear the engine rattling when you need to build up some revs, but there’s barely a peep from under the bonnet at a cruise.

In addition, the interior has a premium feel and the seats provide a good level of support and comfort, too, so I always arrive at my destination ready to get on with the day’s work.

The huge boot means there’s loads of room for all my car washing kit and photography gear. Unfortunately, the parcel shelf cover is a bit fiddly and sometimes flips up when I don’t want it to, but that’s a small niggle.

One bigger problem we had previously, however, was with the DAB radio, which constantly changed station from my preferred BBC Radio 1 back to Capital FM. Thankfully, this appears to be sorted now thanks to some help from Volvo. In the DAB settings screen, the ‘DAB To DAB Handover’ option was selected. This setting apparently means the car switches to the radio band with the strongest signal, which was often FM rather than DAB. Unchecking it and sticking to DAB has worked so far. 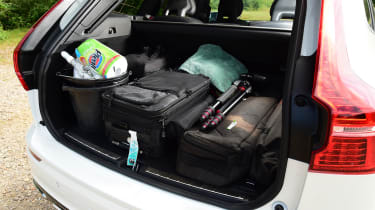 I do more miles than almost anyone else on the team, so once again I’ve had to top up the car with AdBlue. The warning message appeared on the dash at around 7,000 miles, so I bought a refill from a local garage for £14.99 and topped it up using the supplied filler nozzle.

With the miles quickly piling on, it will soon be time for the XC60 D5 to leave the Auto Express fleet – but there’s still more to come from the Volvo SUV before it does. 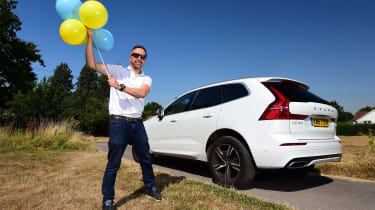 I’ve been piling on the miles recently in our Volvo XC60, which means my attention has been drawn to one of the SUV’s most impressive aspects: the ride quality.

Our car is fitted with the £1,500 Active Four-C Chassis option that adds adaptive air suspension, and it really does feel like I’m driving along on a cushion of Swedish air.

The Scandinavians didn’t fare too well against England in the World Cup, but there’s no doubt that Volvo’s clever suspension technology has English roads truly sussed.

Even the most rutted and potholed roads in my corner of the country, Essex, are no problem for the XC60 when its chassis is set to the softest mode, and after many miles of motorway travel I still hop out of the car feeling as fresh as when I got in. 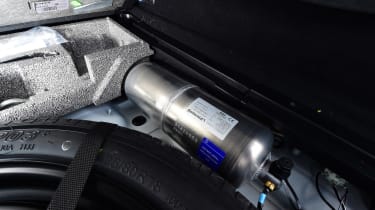 The Volvo is also a massive help for me as a photographer, because once I arrive at our shoot location, I’m able to ride in the XC60 and get stable and sharp tracking shots easily; I’m never flung around by poor road surfaces.

It’s not all about the suspension, though, because the front seats are also among the most comfortable I’ve had in any of our fleet cars over the years. They’re padded enough to provide comfort, but they’re still supportive as well.

Sadly it’s not all good news from the XC60; I’m having some trouble with the infotainment system. When it’s set to DAB, any time the signal is lost it resets to Capital UK, which isn’t my preferred station. This means I’m having to stick with old-fashioned FM radio instead, so I’m limited on which stations I can to. It’s not the end of the world, but is still irritating nonetheless. 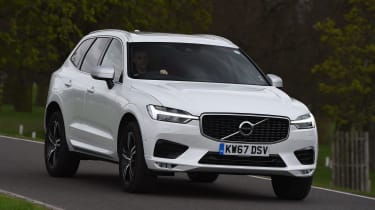 On top of the world; that’s the Volvo XC60. Earlier this year it was crowned World Car of the Year, a heavyweight title to match its heavyweight ability.

But why is it proving such a knockout? If our time with the car is anything to go by, a lot of its success can be attributed to the design. We’ve lost count of the admiring comments that have come our way while using the car.

Yes, Volvo’s styling cues are now well established since the launch of the XC90 four years ago, but this evolution of the clean Scandinavian look remains a breath of fresh air compared with bland or fussy rivals. 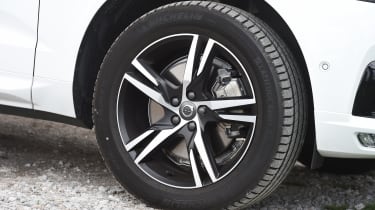 It’s the simplicity that really appeals; the Thor’s Hammer light signature, for example, is a straightforward piece of design that really works, despite its increasing familiarity.

The R-Design trim of our model adds a modest dash of sporty flair without veering into tastelessness, with 19-inch diamond-cut alloys and black gloss dual integrated tailpipes subtle but classy add-ons.

Inside, the ‘less is more’ theme continues, with a beautifully crafted dashboard that’s dominated by the portrait-style eight-inch touchscreen. All the information it displays is presented in a perfectly logical fashion.

Of course, all this would mean very little if the XC60 fell short in other areas, but it feels well built and is very comfortable. We’ve also found a solution to the sat-nav niggle we mentioned in our last report. Reader Paul Taylor pointed out that had we used a different menu, highlighted by a magnifying glass, to search for a landmark, the car would’ve recognised it. Thanks Paul. 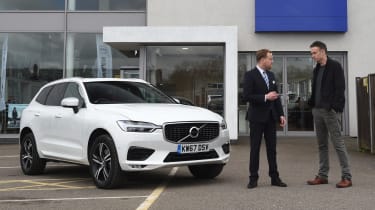 There can’t be a more fashionable type of car currently than a premium SUV. And we’ve just taken delivery of one of the very best in the shape of the Volvo XC60, which held off the likes of the Jaguar F-Pace and Mercedes GLC to be crowned class champion at our New Car Awards last summer.

I headed over to Volvo West London in Chiswick, where sales executive Perry Lodge was delighted to hand over the keys. If first impressions count, the XC60 is off to a great start, because it looks absolutely fantastic in premium metallic Crystal White paint (£950).

While Volvo has succeeded in giving the car a simplistic, classy look, the name of the model we’ve gone for is anything but understated. So say hello to the – sharp intake of breath – D5 PowerPulse AWD R-Design Automatic. 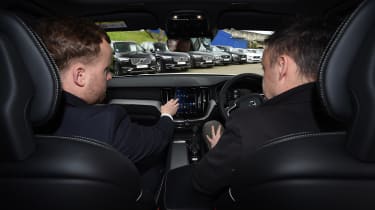 The D5 sits above the entry-level 188bhp D4 model, and with 232bhp transmitted to all four wheels via an eight-speed auto, it promises to deliver 0-60mph in a punchy 6.8 seconds.

We’ve yet to stretch the XC60’s 2.0-litre four-cylinder engine, but it’s clear that it has more than enough muscle for our needs, and is impressively refined, too. The PowerPulse label refers to under-bonnet tech that improves performance by reducing turbo lag.

Although our model is bedecked in the raciest trim, R-Design, don’t be fooled into thinking that the drive is overtly sporty. The focus is more on comfort, with the £1,500 adaptive dampers and electric air suspension taking the edge off any bumps that might catch out the special R-Design diamond-cut matt-black 19-inch alloys.

Inside, there’s the same sense of cutting-edge style. The dashboard is dominated by the nine-inch portrait-style touchscreen that has become a feature of all Volvos since the debut of the XC90 three years ago. All the car’s key functions are controlled via the display, and although on first use the set-up can appear quite daunting, it’s actually fairly straightforward to follow after a couple of outings. There are a lot of menus and sub-menus, but once you work out where everything is, operating them is absolutely logical.

And an example of the attention to detail that has gone into the XC60 is that there is even a branded cloth supplied to wipe away the inevitable grubby fingermarks that amass on the screen after regular heavy usage.

The touchscreen also displays the Sensus navigation with traffic info and lifetime map updates that come as standard on every XC60. But if I’m completely honest, it’s not my favourite sat-nav set-up. 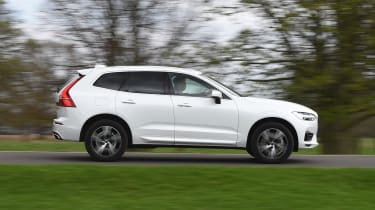 The mapping could be clearer, although I like the fact the standard 12.3-inch active TFT driver’s information display also shows the routing. Yet the navigation got off to a less than auspicious start when it failed to recognise the very first postcode I tapped into it. I reached my destination of Woburn Abbey without any problems, but is it too demanding to expect better of a £50,000-plus car?

The £51,930 total as tested includes a number of options designed to make life with the SUV even more enjoyable.

First up is the £525 Winter Pack, which hopefully we won’t have to make too much use of as summer approaches. This comprises a heated front windscreen and washer nozzles, plus headlight cleaners. Yet the headline act  is a truly lovely heated steering wheel.

All in all, then, the XC60 is shaping up to be a wonderful addition to our fleet. Will it deliver? We’re looking forward to finding out.