The XC60 lacks the XC90’s seven-seat option, but there’s still enough space for five to be comfy with decent luggage room, too. The modern cabin design is also practical; with plenty of storage cubbies in the front and good door bins, so you’ll be able to stow your possessions easily.

The new XC60 is 261mm shorter but only 9mm narrower and 118mm lower than the XC90. It’s a little shorter and lower than the Jaguar F-Pace, but wider.

It’s a big car, but manages to hide its size well on the road, helped by the large glass area that provides excellent all-round visibility.

Large door mirrors also help, while the Volvo’s traditionally square shape – rounded off more than ever on the XC60 – still makes it easier to judge where all four corners of the car are compared with some rivals.

The XC60’s sizeable dimensions translate to decent interior space for driver and four passengers, with good knee, shoulder and head room in the back once you’re inside. As usual, the middle seat is very firm to sit on and a bit of a short straw, but in spite of their tiny dimensions, the rear headrests are well placed and comfortable – they also fold down at the touch of a button on the touchscreen.

There’s decent storage space for odds and ends, too – a storage box between driver and passenger with a quality, sliding cover; a deep cubby between the seats and sizeable door bins, too.

Access through the rear doors can be a little problematic if, for example, you're attempting to secure a child into their seat – the aperture is slightly narrow and the doors could do with opening by a few more degrees.

The XC60’s boot, as with most in this class, is dwarfed by the Jaguar F-Pace’s, but is still big enough for most family’s needs at 505 litres. The optional powered tailgate lifts high out of the way, leaving a wide opening that’s very handy. The rear seats are easy to fold and go down completely flat, while a handy reversible mat with carpet one side and plastic on the other, will even fold out to protect the rear bumper.

The Volvo XC60 has a solid range of towing capacities, varying according to which engine and number of driven wheels you opt for. The maximum an XC60 is rated to tow is a 2,400kg and this top braked trailer towing capacity is available with petrol or diesel engines. The T6 and T8 Twin Engine plug-in hybrid models have a 2,100kg towing limit. 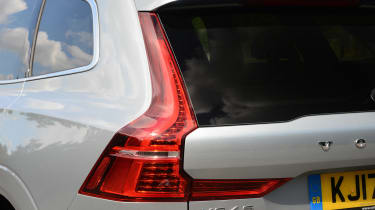 25
Go Back toInterior, design and technology
Continue ReadingReliability and Safety