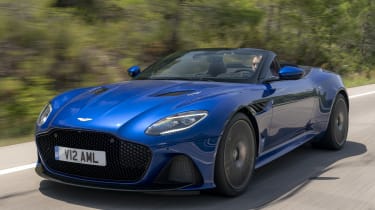 Twelve months on from the launch of the new range-topping Aston Martin, the DBS Superleggera, along comes the convertible Volante version. It mixes the coupe’s earth-shattering, gut-wrenching performance with the design and image a convertible Aston Martin naturally gives. While it’s not the most spacious and nor is the cheapest car of its type, there’s no denying the Volante is a seriously impressive car and reveals Aston Martin is currently at the top of its game.

Aston Martin claims the new DBS Superleggera Volante is the ultimate expression of a four-seater convertible wearing the famous winged badge. With a top speed of 211mph and a price tag of £247,500 before you’ve gone anywhere near the options list, the new drop-top Aston Martin certainly has the figures to back up that statement.

The Volante launches pretty much a year-to-the-day to when its hard-topped sister was revealed. The DBS Superleggera coupe was billed as not only a new halo model for the British brand, but also as a ‘Super GT’ – one rung higher than the DB11 on which it’s based. And so the – rather pompously named – DBS Superleggera Volante becomes the new premier super GT convertible in Aston Marin’s now two-car open-top line-up.

It’s in pretty rarified territory is the new Volante. As Ferrari isn’t about to make a convertible version of its mighty 812 Superfast any time soon, it’s really only the Bentley Continental GT Convertible that can provide suitable 12-cylinder, four-seater, super luxurious rivalry. But the car from Crewe costs a sizeable £72,400 less than the new big Aston, so the DBS Superleggera Volante is setting out its stall quite confidently. 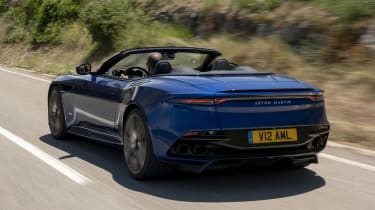 Just like the coupe, the convertible uses the same bonded aluminum platform used on the DB11, and of course the same 5.2-litre twin-turbo V12 packing a colossal 715bhp and 900Nm of torque. At 3.6 seconds the drop-top is 0.2 seconds slower than the coupe but tops out at an identical 211mph, and the additional weight gains amount to 100kg.

In turning the coupe to a convertible, the bodywork has undergone significant work from the doors backwards. The rear haunches are lower and wider than the coupe version and, as there’s no hard-top roof, the Volante doesn’t feature the clever vents behind the rear side windows that suck air through the back of the car and out via a vent in the bootlid.

But the Volante does feature the same aero at the front that reduces drag whilst also expelling hot air from the brakes, and it still develops 177kg of downforce (only 3kg less than the coupe) at 211 mph (which is good to know) and has a better weight distribution at 50:50. Meanwhile, the eight-layer folding roof lowers in 14 seconds and raises in 16, either from inside the car or outside by pressing the unlock button. 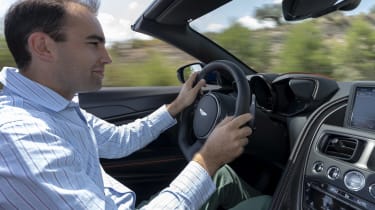 Whether up or down the roof isn’t the main event, however – it’s the sheer power. It’s easy to gloss over the V12’s raw figures in these days of ever-growing performance figures, but the fact of the matter is the Volante is a 700-plus horse power convertible which manages the same 0-62mph sprint time as the ultra limited edition £1.1m Aston Martin One-77 from six years ago. That car, you’ll remember, packed a 750bhp 7.2-litre V12, no turbos and just 750Nm of torque.

The key to the 5.2-litre’s organ-crushing performance is that 900Nm of torque. It kicks in at just 1,800rpm and helps the 1,863kg car to launch down a road at a near impossible rate. At 5,500rpm the bulk of the torque dies down and the wailing V12 and one of ZF’s eight-speed gearboxes deliver the rest of the hair-raising ride.

There are three driving modes – GT, Sport and Sport+ – and each, as you would expect, ramp up the V12’s responses and engine noise, and there are three suspension settings. Sport+ delivers relentless, bombastic performance but as the Volante is a grand tourer, GT mode will be the preferred setting and here the car is pleasingly serene for the most part. Large road imperfections do send a little shimmy through the windscreen and a Bentley Continental GT feels slightly more composed, but Aston has done an impressive job in giving the Volante two distinct characters. 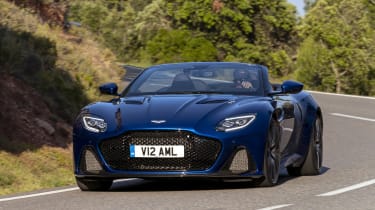 Even on the wide Spanish roads of our test route, the DBS Superleggera Volante always feels a big car. Point the Volante towards tighter, twister roads and you’ll find it hard to place you’ll have to get used to kissing the central white line. But pick some speed up and trust the car’s wonderfully accurate and direct steering, and the Volante becomes a real treat to drive quickly, smoothly and elegantly.

It’s on these roads you’ll also encounter the DBS’s gut-wrenching grip and cornering abilities, and to quell customer feedback of the DBS coupe’s grabby brakes, the standard carbon ceramics (410mm at the front and 360mm at the rear) have been tweaked to deliver a more progressive feel.

The DBS Superleggera Volante may have four seats but to call it a four-seater would be over stepping the mark, as the two rear seats will invariably become a home to wind diffuser should you choose one. With the divider in place (to protect your luggage from the roof mechanism) the boot is slightly too small and the interior, lifted completely from the lesser DB11, is a little disappointing in both its ergonomics and design. It’s here where the Bentley pulls forwards, but in almost every other respect the Aston is top dog. It’s a deeply impressive and satisfying car to spend time in.