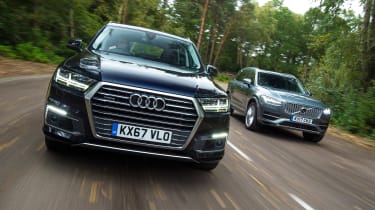 Electrification is a trend sweeping the industry, and in a bid to boost the efficiency of their bigger models, such as SUVs, car makers are turning to batteries and electric motors; these supplement combustion engines and help cut CO2.

Audi’s Q7 e-tron plug-in hybrid bucks the trend by teaming its electric motor with a diesel engine, but the question is, has the brand backed the right horse here? In some ways it’s incidental, because the Q7 isn’t offered with a petrol choice in the UK to electrify – unlike the Volvo XC90.

The XC90 T8 Twin Engine plug-in uses a petrol engine assisted by an electric motor and battery set-up, and is a different solution to the same problem. Which best combines its two methods of propulsion as our favourite big plug-in hybrid SUV? 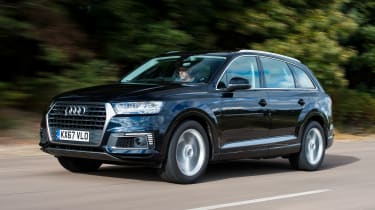 For: Refinement, effortless performance, impressive cabin quality and technology.Against: Not as efficient as Volvo, no third row of seats, battery eats into boot space.

Like any plug-in hybrid worth its asking price, the Q7 e-tron’s greatest trick is making what is an incredibly complex and detailed engineering set-up simple to use.

Under the bonnet there’s a 3.0-litre V6 TDI engine driving an eight-speed automatic transmission that sends power to all four wheels as part of Audi’s famous quattro package. Integrated into this transmission is an electric motor that can drive the gearbox with the engine off for all-electric running, while a clutch separates it, so the combustion engine can power the car exclusively if needed, too.

This all sounds very complicated, because it is, but what you need to know is, with a fully charged battery, there’s a total of 369bhp and 600Nm of torque. This meant at our test track the Q7 sprinted from 0-60mph in a swift 6.4 seconds, despite its significant 2,445kg bulk, which is partly due to its lithium-ion battery. 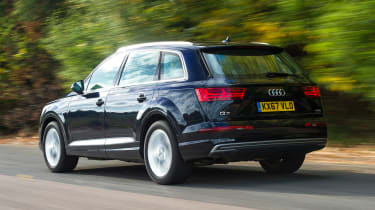 The big benefit is the 126bhp electric motor’s significant 350Nm of torque, which is 10Nm more than you get from an Audi A3 2.0 TDI and is available instantly, filling in for the diesel unit while it gets into its stride.

However, even with the combustion engine off, there’s still plenty of performance. Audi claims the e-tron will hit 83mph in electric mode, which we can vouch for, and acceleration around town is brisk enough, with only a faint whine from the motor.

On the road the e-tron is smooth and hushed, cruising serenely in comfort due to the smooth damping from the optional air suspension set-up – fitted as part of the Tour Pack Advanced or as a £2,000 standalone extra – which soaks up most imperfections a road can throw at it.

That weight means it’s not the most dynamic vehicle, but the Audi still steers sweetly and in the sportier driving modes can be hustled along at a respectable pace. Yet that’s not in keeping with the hybrid ethos, so you’re better revelling in the Q7’s comfort and cosseting refinement. 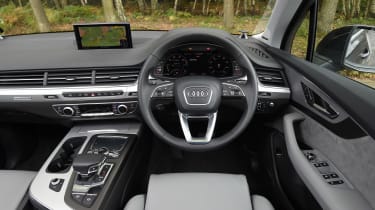 The drawback is the battery pack is under the boot floor, which means, unlike the standard seven-seat Q7, the e-tron only has room for five. The XC90 T8 is a full seven-seater, however. 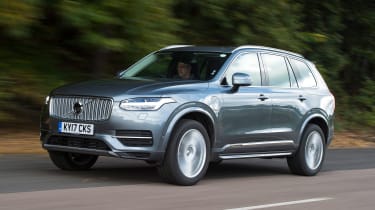 For: Efficiency, no real loss of practicality over the standard car, performance and technology.Against: Droning engine note, not as comfortable as Q7, infotainment can be difficult to use on the move.

Volvo announced a major electrification push last year with a strategy that will see all of its models offer some form of battery power from 2019. But leading the charge at the moment are cars such as the brand’s first petrol-electric plug-in hybrid, the XC90 T8.

The 2.0-litre petrol and electric motor serve up a combined 401bhp and 640Nm of torque, which meant the XC90 outperformed the Q7 in our track tests. The Volvo went from 0-60mph in 5.9 seconds, which is impressive for a 2,256kg SUV. You feel the 87bhp electric motor’s influence off the line, helping fill any holes in the 316bhp combustion unit’s power delivery.

It isn’t as potent as the Audi’s electric motor. Rated at 240Nm, it doesn’t quite have the Q7’s punch in EV mode, but there’s still enough performance, especially when in urban traffic. Yet with both power sources delivering drive on twistier roads, the XC90’s engine drones more than the Q7’s smoother V6 TDI. 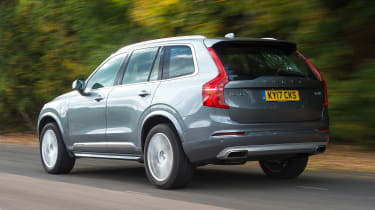 The gearbox is adept at picking the right ratio and managing changes smoothly, but unlike the Q7, it doesn’t respond as well in manual mode.

On top of that, the ride isn’t as good as the Audi’s. The Volvo’s air-suspended chassis (a £2,150 option on Inscription trim) feels firmer and harsher, plus doesn’t offer the plush control over the body and wheels’ vertical movements, meaning over rough surfaces it jars a little.

Still, the firmer-feeling set-up and 189kg weight saving ensure the XC90 is marginally more agile. It resists roll better and doesn’t feel quite as heavy or cumbersome as the e-tron.

Despite this sportier side, comfort is more of a priority, while efficiency also plays a big part in what a plug-in hybrid should deliver. At £66,055 – a premium price tag by any standard – so does equipment, and the Volvo scores well. 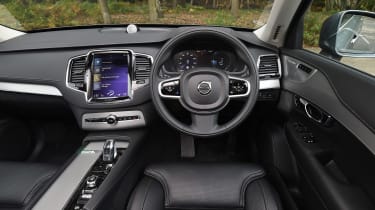 You get a nine-inch touchscreen sat-nav, climate control in all three rows, keyless entry and go, adaptive cruise with semi-autonomous driving for motorways, heated leather seats and safety tech, including Volvo’s City Safety system with autonomous braking. Oncoming Lane Mitigation helps you swerve to avoid a head-on crash and there’s a device that prepares the car for an impact if it senses you straying off road.

The XC90 set the template for Volvo’s current-era cabin design, and while everything is nicely integrated and the ergonomics are good, material quality isn’t quite as classy as in the Audi. Still, it’s really not far behind. 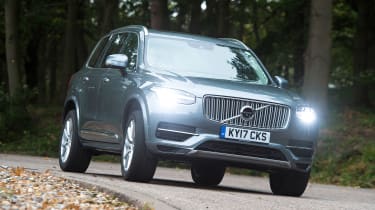 The XC90 T8 has fewer drawbacks and delivers far better economy. It’s not as comfortable as the Q7 and trails in terms of quality inside, but it’s as good to drive, even more practical and will be much cheaper to buy and run. It’s a hybrid that doesn’t demand much compromise. 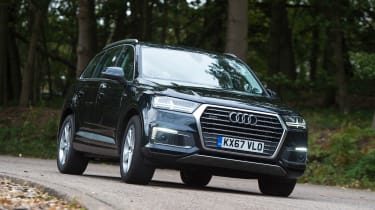 The Q7 e-tron isn’t as versatile as the XC90 T8. It’s smooth, refined and has a great mix of pace and comfort, but trails the Volvo on efficiency, which counts double for a car of this type. It’s more expensive and does without a third row of seats, even if it has a high-quality cabin.