Safety kit is up there with the best; reliability is yet to be tested

The Q7 should live up to Audi’s reputation for owner satisfaction, reliability and safety. The engine and gearbox are developments of existing technology, so are proven in the real world, while the interior feels solid enough to stand up to the knocks and scrapes of family life.

The Q7 didn’t feature in our 2019 Driver Power customer satisfaction survey, but Audi finished 16th overall out of 30 manufacturers. 21% of Audi owners reported a fault with their car.

The Q7’s electrical systems are incredibly complicated, though, with an arsenal of cameras, sensors and high-power computer processors all built into the car. Only time will tell whether they can remain glitch-free. What we do know is that the Q7 is packed with cutting-edge technology that should help to take some of the stress out of driving, but also keep you out of harm’s way. 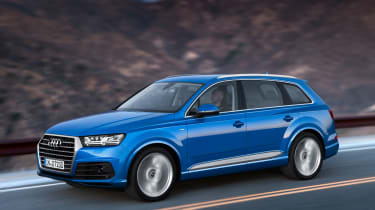 Standard safety and assistance kit includes lane departure warning, a reversing camera, traffic sign recognition, hill-hold assist, cruise control with speed limiter and all-round parking sensors, along with automatic emergency braking. Audi offers a Tour Pack for around £2,000 that adds adaptive cruise, predictive safety assist and a range of other high-tech safety systems; higher-spec models get much of this as standard.

The latest Q7 achieved the maximum five stars when subjected to the stringent Euro NCAP crash test, although interestingly, its performance in most areas was narrowly shaded by the new Volvo XC90. The Audi achieved scores of 92 per cent for driver protection, 86 per cent for child protection and 71 per cent for pedestrian safety, as well as 72 per cent for on-board safety systems. In contrast, the Volvo was awarded ratings of 97, 87, 72 and 94 per cent, respectively.

As with every other Audi, the Q7 comes with an unlimited mileage warranty for two years, with a 60,000-mile limit in the third year. You can pay around £600 to increase the cover up for an extra year or 75,000 miles. If you want a five-year/90,000-mile warranty, the premium rises to over £1,300. The Volvo XC90 has a similar standard warranty offer, although there’s no mileage cap on the three-year cover on the BMW X5.

Audi offers a range of servicing and maintenance packages for the Q7 through its dealers, at a cost that varies according to the level of cover required. Rates are broadly competitive with competitors like BMW and Volvo.