The latest Audi Q7 boasts a bold look and a luxurious, hi-tech interior

The Q7 benefited from a comprehensive facelift in 2019, bringing a sharper, less ungainly exterior and a cool, high-quality interior to the mix. The largest SUV in Audi’s range now appears much better proportioned than before, appearing wider and more handsome.

Big steps have been made inside. The overall feeling is akin to that found in the similar Audi Q8 SUV; an expansive, angular dashboard houses the brand’s latest dual-screen infotainment system and another screen behind the steering wheel in place of traditional dials, while swathes of leather trim and quality plastics help lend an expensive feel.

As is expected in this class, there’s a staggering array of technology crammed into the Q7 – either as standard or to be found on the lengthy options list. Audi’s Virtual Cockpit digital dials, sat nav, a 36-month subscription to Audi Connect and a wireless phone charger all come as standard, as do all-round parking sensors, cruise control, a reversing camera and lane-departure warning. The options list is expansive and expensive, offering goodies like a 360-degree camera system and two premium sound systems. 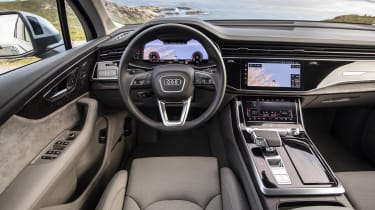 Inside, the Q7 benefits from a luxurious and attractive layout. The dashboard has a modern, almost minimalist design and is constructed using the kind of classy materials typical of Audi. Features like the optional panoramic glass roof add a further touch of luxury, plus you can personalise the interior with a wide range of colours and finishes.

The Q7 has lots of premium kit. LED headlights, cruise and four-zone climate control come as standard, as do heated electric seats, Bluetooth, keyless go and sat-nav. Audi’s 12.3-inch Virtual Cockpit, which adds a screen in front of the driver, is standard across the range.

Audi’s MMI Navigation Plus with MMI Touch infotainment system is standard, incorporating an upper 10.1-inch touchscreen and lower 8.6-inch touchscreen. These are used to run a responsive infotainment system that controls the majority of in-car functions. It’s among some of the more manageable systems on sale, but BMW still leads the way in terms of user friendliness. Unlike the BMW system, however, Android Auto and Apple CarPlay are standard.

The Comfort and Sound Pack sits as the top of the options list and combines a number of popular options for just under £2,000, including a 360-degree parking camera, keyless entry and start, extended ambient LED interior lighting and a 17-speaker, 16-channel, 730-watt Bang & Olufsen sound system.