The new Audi SQ7 Vorsprung Edition stands out from the SUV crowd, but it comes at a hefty price 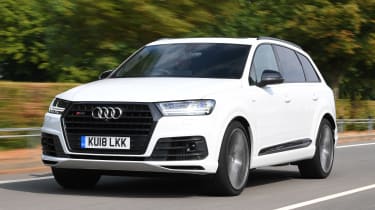 The Audi SQ7 is arguably one of the finest all-rounders money can buy. Little else offers such a blend of performance, comfort, practicality and fuel efficiency. The Vorsprung Edition does little to change any of that, but it comes at a price. Crunch the numbers, and it works out at similar value for money than a similarly-specced standard SQ7, but there’s no denying it’s seriously expensive.

If you thought a five-metre long SUV couldn't be any more conspicuous, think again, because this is the Audi SQ7 Vorsprung Edition. It’s a special version of Audi’s biggest, most powerful SUV, and it’s made an already imposing car even more menacing.

So what do you get for the money? Well, the new wheels are the most obvious addition: the SQ7 Vorsprung rides on a huge set of exclusive Audi Sport 22-inch alloys. Elsewhere, the SQ7’s front grille, roof rails and side window trims are all blacked out, side running boards have been added beneath the doors, and Matrix LED headlights and scrolling indicators are included, too. 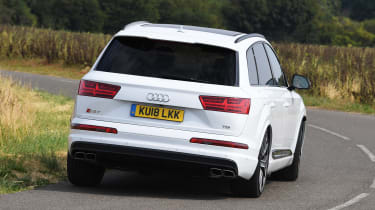 The interior gains plenty of goodies, as well. The seats are trimmed in soft leather with a diamond stitching pattern, there’s more leather on the door pulls and armrests, and the headlining is finished in Alcantara. The seats are heated front and rear, though cooled seats would be nice – especially when they’re available on cars that cost barely a third of the price.

The upgraded technology pack means that Audi’s fantastic Virtual Cockpit and a head-up display are equipped as standard. The 12.3-inch dials are paired with an 8.3-inch screen that, in a sign of how quickly tech moves on, is already feeling its age. The graphics are sharp and the menus well-laid out, but of the three main input methods, only the click wheel is usable; the touch pad is pointless and the voice recognition software is poor. Audi’s latest infotainment setup, used by the A8, A7 and A6 has really moved the game on even further.

There aren’t any mechanical changes relative to the standard SQ7’s setup, so the Vorsprung Edition remains the same to drive. And that’s a good thing: the SQ7 handles like no 2.3-tonne car has any right to. Sure, it always feels its weight - most obviously when moving off - but once up to speed, it remains remarkably stable, agile and flat through the corners.

Yet it’s so comfortable, too. The 22-inch wheels add just a tiny bit of fidget to the ride – and road roar from the wide tyres is a smidge more audible – but despite this, it remains one of the most comfortable and refined cars on the market.

The fantastic body control is thanks in no small part to the air suspension and the clever anti-roll system. The latter actively fights body lean through turns by twisting the anti roll bar in the opposite direction. To do this, is applies 1,200Nm of torque through its motor. To put it another way, that’s 300Nm more than the engine has to play with.

But what an engine it is. The 4.0-litre V8 twin-turbo diesel throws the SQ7 along the road at a stunning rate. An electric compressor helps out the two turbos, spinning up almost instantly at low revs to effectively eliminate turbo lag. The result? A crisp throttle response and a seamless surge of acceleration; a sub-five second 0-62mph time is enough to give a Volkswagen Golf R cause for concern. 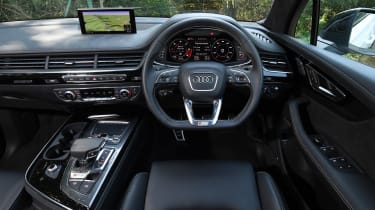 It even sounds great - and not just compared to the typically low bar set by most diesels. It’s got the tone of a deep, growling petrol-powered V8 under acceleration, with a bit of old-school Impreza WRX flat-four throb at idle thrown in for good measure.

It’s even fairly frugal, all things considered. The extra large wheels reduce fuel consumption to a combined 37.2mpg - 2mpg less than claimed for the standard SQ7 - but in the real world you can realistically expect around that figure at a 70mph cruise. In other words, on a long run you’re looking at the best part of 700 miles between refills.

But is it good value? A three-year PCP deal for the SQ7 Vorsprung based on a 10 per cent deposit comes to about £1,085 per month - £190 per month more than the SQ7 on a like-for-like deal. But that’s before you’ve picked the options you'll want to add to the regular SQ7, in which case they both come to pretty much the same price.