Running a large, premium, seven-seat SUV is never going to be cheap, but the latest Q7 shouldn’t break the bank thanks to efficient diesel engines and the weight-saving regime Audi put the car through during development.

The 55-badged, 3.0-litre V6 petrol model, manages 25.4-26.9mpg depending on specification, while producing 239-252g/km of CO2. Audi, under WLTP testing, claims both the 45 and 50 V6 TDI diesels can deliver 32.1-33.2mpg, with CO2 emissions at 222-230g/km. In using the latest WLTP method, it does mean these figures should be achievable in everyday driving. However, it puts the Q7 in the highest possible 37% Benefit in Kind bracket for company car buyers. 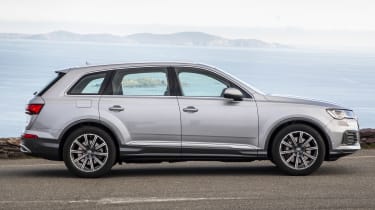 The Audi Q7 sits high-up on the CO2-weighted first year tax scale. Diesel customers will pay £1,280 at first registration, while those opting for the 55 petrol version will be asked for £1,815 in tax. These figures are usually rolled into the on-the-road-price.

After this first year payment you’ll pay the standard £145 per year, plus an extra £320 per year for five years – a surcharge applied to all vehicles with a list price of £40,000 or above. This will bring your yearly tax bill in years two to six of ownership to £465 per year.

While you won’t pay over the odds at the pumps by SUV standards, insurance bills will be steep. The Q7 falls into groups 42-49, depending on engine/trim combination. Not surprisingly, the SQ7 is in the highest group 50.

The entry-level Range Rover 3.0 TDV6 Vogue and BMW X5 xDrive30d start from group 45, although the Volvo XC90 with its downsized 2.0-litre D5 diesel engine kicks off in insurance group 33.

Our experts predict that the Audi Q7 will hold onto around 50% of its showroom value at trade-in time after three years and 36,000 miles. Similarly, an equivalent Volvo XC90 will retain around 51% to 53% of its list price over the same period, while the Land Rover Discovery should hold on to around 47% to 55%.