Seating for seven, an enormous boot and good towing ability make for a practical SUV

There’s a spacious, airy feel inside, with more leg and headroom than before in every one of the seven seats. The premium feel is enhanced by comfortable front seats with a full range of electric movement, high-quality materials throughout the cabin and luxury options like soft-close doors.

The driving position is excellent, with plenty of scope to adjust the seat and steering wheel, and visibility is great from the commanding driving position. If the car’s sheer bulk will be intimidating to some drivers, then the parking assistance system will be welcomed.

The high-riding Audi Q7 has lost none of its road presence following its facelift; at over five metres long and just under two metres wide, Audi’s largest SUV is on a par with rivals like the Volvo XC90 and Range Rover. The car’s relatively quick steering and optional four-wheel steer system help make it feel a little smaller on the move, however.

There’s loads of space on offer for passengers, although the Land Rover Discovery is still the car to beat in this respect. The Q7 feels a little cramped in the third row due to a lower roofline, while the floor is also higher, so you’re forced to sit in a less natural position. The lower roof and chunky wheel arches make it more difficult to climb into, although like the Land Rover, the Q7 gets power-folding seats.

Legroom is acceptable in the middle row, but the use of space still isn’t as clever as in the Discovery. The transmission tunnel and bluff dash mean it feels less roomy up front than the Land Rover. 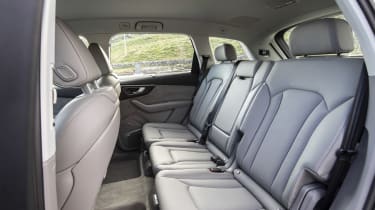 The third row is designed primarily for children, but smaller adults can squeeze in there for shorter journeys, so long as the second row slides to its forwardmost position. To make access to the third row easier, the second row seats fold and tip forwards. When you don’t need the third row, simply push a button on the inside of the boot and these seats fold flush into the load floor. Every passenger seat inside the Q7 features Isofix mounting points as standard.

With all seven seats in place, the big Audi offers 295 litres of boot space – about the same as a Ford Fiesta – accessed via a standard powered tailgate. The Volvo XC90 beats it, with 451 litres on offer with all seven seats in use. However, the Audi expands to 770 litres when you collapse the third row and, with the second row down as well, there’s a massive 1,955 litres to play with – nearly 100 litres more than in the Volvo XC90. There are also useful options such as a powered luggage compartment cover, soft-close doors and a heated windscreen. 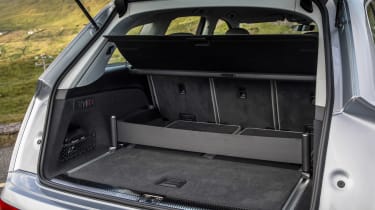 If you tow a caravan, you’re in for a treat. An electrically deployable trailer hitch is on the options list and allows you to tow up to 2,800kg.