The Audi Q7 has great engines, rides beautifully and has buckets of grip and traction

It’s clear that Audi is targeting the Range Rover and Range Rover Sport with the new Q7 because the driving experience is all about luxury.

The standard adaptive air-suspension and the ride is every bit as comfortable as a Range Rover’s, all the while displaying more control over bumps and through corners. For a large off-roader there’s lots of grip, and the steering is much quicker and more precise than either a Range Rover’s or Volvo XC90’s. And while the Q7 is very capable, it’s also a relaxed long-distance companion.

Scroll through the Audi Drive Select modes (or set your own individual parameters for the steering, throttle and suspension in ‘Individual’ mode), and the Q7 is certainly more agile than the original, and you can feel more of what is going on through the seat than before. That’s largely thanks to its MLB Evo platform – the same that underpins the Lamborghini Urus and Bentley Bentayga.

In Comfort mode, the steering is still light and short on feedback, but the car is far more willing to change direction and stability is rock solid at high speeds. That’s helped by the optional four-wheel steering system that turns the rear wheels in parallel with the front wheels at high speeds, or in opposite directions at lower speeds to improve the turning circle. 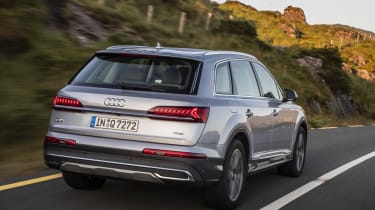 This is a 4x4 you can drive incredibly quickly, too. Ramp things up to Dynamic mode and the Q7 immediately feels more alert – it’s never harsh, but the body control is tauter, which gives you more confidence to push the car harder. Permanent quattro four-wheel drive gives excellent traction, too.

The steering isn’t full of life, but there is some feel, and by flicking the smooth eight-speed auto box up and down with the steering wheel paddles, you can have a surprising amount of fun hustling this big SUV around.

Although the Q7 isn’t designed to match a Range Rover off-road, the quattro system is more than capable of hauling the car through a muddy field or up a slippery track. In normal operation it splits the torque 40:60 front to rear, but can send up to 85 per cent of the torque to the rear axle if required.

In reality, few Q7s will ever leave the road. It's agile, and adding the all-wheel steering option enhances this; while its rivals use four-wheel drive to help off road, the Q7 feels more tuned for fun on it. Overall, the car is very pleasing and relaxing to drive either in town or on the motorway. It helps that the seats are comfortable and that very little outside noise enters the cabin.

Audi introduced a range of mild hybrid engines for the Q7 in 2019 with the aim of improving fuel economy and reducing CO2 emissions. There are three engines to choose from, two diesels and one petrol; all are 3.0-litre V6 units assisted by a small battery and belt alternator starter that form a 48-volt mild-hybrid system.

The entry-level model is the 45 TDI diesel with 228bhp and 600Nm of torque; the step to 50 TDI brings 282bhp for a 6.5-second 0-62mph sprint and 150mph top speed. All come fitted as standard with quattro four-wheel drive and a slick eight-speed tiptronic automatic gearbox.

Petrol buyers are catered for by the 55 TFSI, which boasts 335bhp. Acceleration is impressive in a car of this size; 0-62mph takes just 5.9 seconds and top speed is limited to 155mph. However, if it's power you're after, and your budget is able to stretch far enough, there's the barnstorming SQ7. Powered by a 4.0-litre V8 diesel, it produces 429bhp and a ludicrous 900Nm of torque, which means it completes 0-62mph in 4.8 seconds.

Two plug-in hybrid models will arrive in due course, badged 55 TFSI e and 60 TFSI e; the former produces 375bhp and the latter an impressive 449bhp. The same petrol 3.0-litre V6 features in both, augmented by an electric motor and battery, allowing for all-electric drive for around 26 miles.