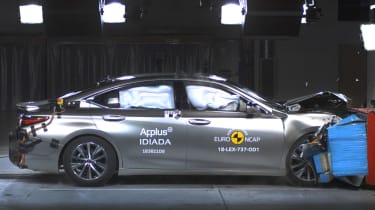 Buying a safe car is a high priority for most car buyers, especially those needing a vehicle for family use. And Euro NCAP (the European New Car Assessment Program) gives ratings for new models to help you buy the safest one possible. Below we run down the cars that Euro NCAP rates as the safest in a variety of classes, including the cars that earned the highest safety scores in its 2018 test cycle.

Producing a safe car with a high Euro NCAP score has become harder over the years, as the Euro NCAP crash tests and technical requirements have been made tougher. But this means today's cars are far safer than those built even 5 years ago. To highlight this fact, Euro NCAP has revisited older models and re-evaluated them under the new stricter test conditions. As a result, some older cars that once earned four or five stars have done far worse under the latest test regime, with some failing to earn a star rating at all.

Euro NCAP tests cars for structural strength with a variety of impact tests that simulate the most common kind of road traffic collisions on European roads. It gives percentage scores for the protection of adult and child occupants (with and without child seats), plus a score for pedestrian protection. Euro NCAP provides full descriptions of how effective a car is at protecting its occupants and other road users, and highlights any areas where a car might be deficient. 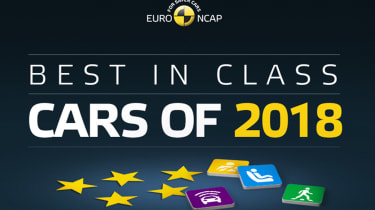 The big changes have taken place with the addition of a fourth safety score, which is called Safety Assist. This is another percentage score, but this time it covers a car's electronic safety systems that are designed to prevent an accident in the first place. Included under this catch-all category is safety kit such as autonomous emergency braking, electronic stability control, adaptive cruise and blind spot and lane assist systems.

To highlight how important these features are, Euro NCAP changed its scoring structure so that any car that doesn't come with these advanced safety systems would not be able to earn a five-star rating. However, as some makers include this type of kit in option packs, some cars will have more than one star rating to reflect this, which could cause confusion.

The Mazda CX-30 recently claimed the title of the “safest car on sale today,” scoring 99 percent for adult occupant protection in Euro NCAP’s main crash-test. It scored maximum points in the full-width barrier, side impact and side pole tests and was awarded an 86 percent child occupancy rating, scoring a five-star rating overall. Matthew Avery, Director of Research at Thatcham, said: “In the event of an accident, there are few safer places to be than the front seats of the Mazda CX-30.”

At the end of every year, Euro NCAP names its Best in Class vehicles. In 2018, there were four contended classes – Best Large Off-Road, Best Large Family Car, Best Small Family Car and Best Hybrid & Electric Car. Despite this, there were only three winners, with the Hyundai Nexo named best large SUV, the Mercedes A-Class the best small family car and the Lexus ES winning both the large family car and hybrid & electric categories. Euro NCAP’s 2019 results are yet to be released, but the CX-30 should take the win in the Best Small Off-Road category after it was named as the safest car Euro NCAP has ever tested in November 2019 with a 99 per cent score.

As NCAP only tests a certain number of cars per year and there are not always enough vehicles tested in a particular class to declare a winner for that category. Therefore, previous winners from categories not mentioned above are as follows, with the dates they were tested shown in brackets:

Curious about the safest cars from previous years? Here are the past overall winners of Euro NCAP's safest car award…

Visit our class winner pages to see previous winners in that car's class. Be aware though that Euro NCAP's car classifications have changed over the years so some cars may be in categories that don't really define them.

Regardless of class, however, all cars Euro NCAP tests in a particular year go through the same strict testing procedure. Just remember that even a five-star car tested a few years ago may not be considered quite as safe under current testing procedures.

How do the Euro NCAP Car safety tests work?

Cars are crashed into obstacles head-on, side-on and slightly offset to one side. The cars are fitted with sophisticated crash-test dummies covered in sensors, which tell researchers the forces applied to various body parts in an impact. The crash tests give a picture of the overall safety of the car - effectiveness of seatbelts and airbags as well as its body rigidity during a crash. Cars are evaluated for safety of adult occupants, child occupants, and younger children in properly fitted car seats.

Cars are then tested for pedestrian safety, and a dummy leg and head are fired at the front to gauge the forces involved in a pedestrian collision.

A more recent development has been the addition of a 'safety assist' category to the Euro NCAP tests. This refers to equipment such as autonomous braking and lane-keeping assist which doesn't aid in a crash, but prevents it happening in the first place. This category is so important now that it's impossible for a vehicle to achieve the full five-star rating if it's not equipped with some of these 'active safety' features.

The confusing part for consumers comes when trying to compare cars. Euro NCAP constantly revises its testing criteria, making it harder for cars to reach the full five-star rating. A five star car tested in 2012 would more than likely only receive three or four stars if tested in 2018, as the tests become more stringent and challenging.

It's good news for car buyers though, as chasing a full five-star rating has kick-started manufacturers into really concentrating on safety features. A new car can't really be considered class-leading anymore without a top recommendation from Euro NCAP.

With that in mind, here's Euro NCAP's list of the safest cars it's tested under the modern testing procedures. These models represent the pinnacle of new car safety in each sector of today's market.