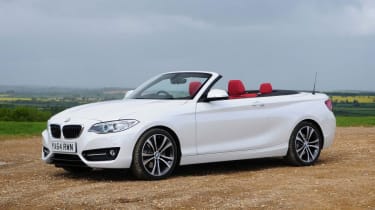 Whether your focus is on performance or economy there’s a 2 Series for you, from the frugal 218d to the supercar-baiting M235i and M240i. Whichever variation on the theme you buy, you’ll get a car that’s good to drive, beautifully built and sharply styled. While no 2 Series is an ideal family car in terms of practicality, both the Coupé and Convertible editions are a lot more usable than you might think, because BMW didn’t try to turn the 2 Series into a five-seater. If you really need some extra space, the 4 Series Coupé and Convertible might be better suited. But if you’re after a compact, sporty car that puts the emphasis on style and driving pleasure, the 2 Series is likely to tick all of those boxes and more.

BMW has built compact sporting family cars since the sixties, most notably the 02 Series sold between 1966 and 1977. By 1975 the 3 Series had been introduced and as subsequent generations grew, the firm reached the point where it needed a smaller model at the bottom of the range.

That was the 1 Series, and it went on sale in hatchback form in 2004, with the Coupé and Convertible following in 2008.

For the second generation, BMW split off the Coupé and Convertible as a separate range – the 2 Series we cover here. But we’re not including the specialist M2 from 2016. 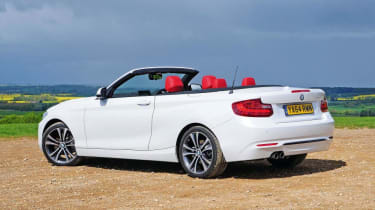 A facelifted 2 Series went on sale in October 2017 with a reprofiled nose, a new dashboard and LED headlights, as well as new colours and fresh interior finishes.

There aren’t any bad choices – all the engines are strong and frugal – but we’d go for an auto rather than a manual because the transmission is so good. Buy a 220d xDrive and you’ll have to have an auto. 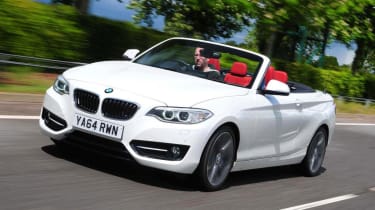 Entry-level SE is arguably the best trim because it focuses on comfort rather than sportiness. However, it still has 17-inch alloys, climate control, DAB radio, a 6.5-inch colour display, heated door mirrors, rear parking sensors and automatic headlights.

The Sport still has only 17-inch wheels but adds switchable driver modes, sportier trim inside and out, and ambient cabin lighting. M Sport spec gets 18-inch wheels, black headlining on the Coupé, a bodykit, sport suspension and xenon headlights.

Alternatives to the BMW 2 Series

The 2 Series has very few direct rivals. In Convertible form there is the Audi A3, as well as VW’s Golf, Beetle and Eos.

While the A3 is a credible rival, the Beetle and Eos are aimed at different markets, and the Golf sits in between. Whereas the BMW has a 2+2 configuration, all of the other convertibles on the market are either bigger cars or merely two-seaters in the first place.

As a Coupé, the 2 Series also has few rivals. The closest are the Mercedes CLA and Audi A3 saloon, whereas the Audi TT, Toyota GT86 and Subaru BRZ are hatchbacks, as is the Porsche Cayman. This is more costly but worth stretching to, because it’s sublime to drive. The VW Scirocco is a practical hatch that’s good value, very usable and agile, if not quite as sharp as the BMW.

It’s worth trying to find a car with the optional Harman Kardon hi-fi fitted; it sounds much better than the standard system.

The 2 Series is fitted with run-flat tyres as standard, which means there’s no spare wheel. But the ride isn’t too badly affected.

Squeaky brakes can affect some high-performance models and brake dust can accumulate quickly. Listen out and inspect used cars for this.

Since March 2018, all diesel-engined 2 Series have used AdBlue and, at the same time, all petrol engines got a particulate filter. 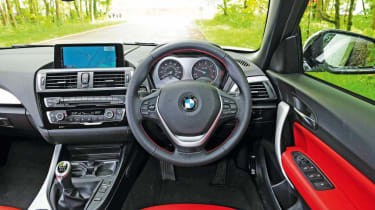 Despite being an entry-level model, the 2 Series still has a premium feel in terms of the design and materials used. It has just two rear seats, but there’s more space than you might think; only tall people are likely to find there’s insufficient head or legroom. Boot space is very good, at 390 litres, and although the seatbacks are fixed, a flip-down panel between the two seats is an optional extra.

The brake fluid should be renewed every two years (£70), but the long-life coolant should never need to be replaced and there are no timing belts to change. 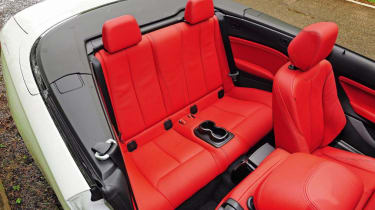 There have been 10 recalls, and all cars built up to June 2018 are likely to have been affected by at least one.

The 2 Series was placed 50th in the 2018 Driver Power new car survey, which is okay, but it was below the Audi A3 and BMW 3 Series. Its only top-20 scores were for infotainment, the engine and transmission; surprisingly the ride and handling weren’t highly rated, while build quality and reliability were even worse. Running costs got a thumbs up, but everything else was mid-table.